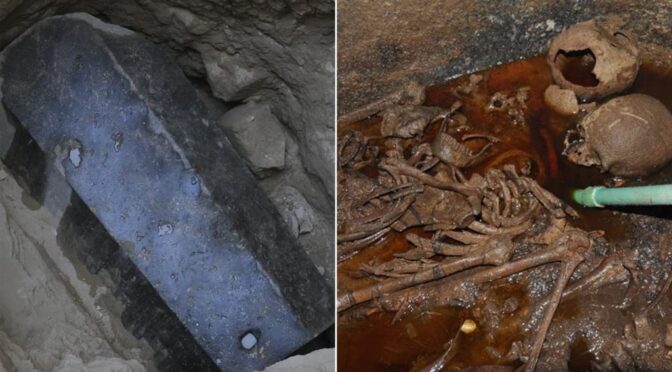 In Alexandria, Egypt, there was opened a mysterious black granite sarcophagus that dated back to the time Alexander the Grand invaded the city in 331 B.C., has been opened.

The finding was believed that the huge sarcophagus contained Alexander’s remains at the beginning of this month and that opening the sealed and foreboding-looking box would unleash a curse. Neither seems to be true … unless stinky sewage causes some sort of torment.

Archeologists discovered inside the sarcophagus the bones of three skeletons along with the waste. These may be those of soldiers, Egypt’s antiquities ministry said in a statement.

Pictures released by the ministry show the sarcophagus full of the liquid sewage, which must have seeped in at some point.

Analysis of the skeletal remains is ongoing, but initial results suggest that one of the individuals found in the sarcophagus suffered a blow from an arrow, the ministry said in the statement.

No inscriptions or works of art have been found on the outside or inside of the sarcophagus so far. It’s also unclear what artifacts, if any, were buried with the skeletons, the researchers said. An alabaster head of a man was found near the sarcophagus when it was discovered.

The sarcophagus, which is nearly 9 feet long, 5 feet wide and 6 feet tall (2.7 by 1.5 by 1.8 meters) — the largest found in Alexandria — was discovered with a thick layer of mortar covering much of it, Mostafa Waziri, secretary-general of Egypt’s Supreme Council of Antiquities, said in a statement released by Egypt’s antiquities ministry.

The mortar led Waziri to suggest that the sarcophagus was never opened after it was buried in Alexandria. It’s uncertain if that suggestion is accurate.

The sarcophagus was discovered by archaeologists from the Ministry of Antiquities who were inspecting an area of land in the Sidi Gaber district of Alexandria before construction took place. Researchers opened the sarcophagus at the site where it was discovered.

After the death of Alexander the Great in 323 B.C., a line of pharaohs descended from one of Alexander’s generals ruled Egypt for centuries. Once the last pharaoh, Cleopatra VII, killed herself in 30 B.C., the Roman Empire took over Egypt.

These pharaohs were involved in numerous wars and conflicts, and it’s possible the three individuals found in the sarcophagus were killed in one of these squirmishes. One of the skeletons shows signs of an arrow injury, suggesting the three may have died in battle. The exact age of the skeletons is unclear.

Why three skeletons, which may be those of soldiers, were buried in a sarcophagus so massive — Waziri said it may be the largest ever found in Alexandria — is also unknown. In ancient Egypt, it was not uncommon for a sarcophagus to be reused, the bodies of its former occupants removed and new occupants put inside. Whether that occurred with this sarcophagus is unknown.

It’s also unclear what artifacts, if any, were buried with the skeletons. Any objects placed in the sarcophagus could have been destroyed by the sewage or may be found later when the object is studied in more detail.

After the sarcophagus was opened, it was transferred to Alexandria National Museum for conservation and further study.