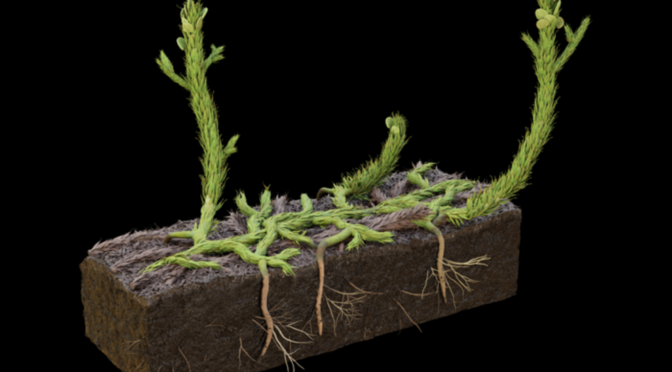 A plant fossil from a geological formation in Scotland sheds light on the development of the earliest known form of roots. A team led by researchers at GMI – the Gregor Mendel Institute of Molecular Plant Biology of the Austrian Academy of Sciences, the University of Edinburgh, and the University of Oxford realize the first 3D reconstruction of a Devonian plant-based exclusively on fossil evidence.

The findings demonstrate that the appearance of different axis types at branching points resulted in the evolution complexity soon after land plants evolved sometime before 400 million years ago. The results are published in eLife.

New research demonstrates how the oldest known root axed developed more than 400 million years ago. The evolution of roots at this time was a dramatic event that impacted our planet and atmosphere and resulted in transformative ecological and climate change.

The first evidence-based 3D reconstruction of the fossil Asteroxylon mackiei, the most structurally complex plant from the Rhynie chert has shown how roots and other types of axes developed in this ancient plant. The fossil is preserved in chert (a type of flint) found near the village of Rhynie in Aberdeenshire, Scotland.

The specimens are exceptionally well-preserved in the 407-million-year-old rocks from the Early Devonian period.

The extinct genus Asteroxylon belongs to the group of plants called the lycophytes, a class that also comprises living representatives such as isoetes and selaginella.

The reconstruction has allowed researchers, for the first time, to glean both anatomical and developmental information of this mysterious fossil. This is of particular significance because previous interpretations of the structure of this fossil plant were based to a large extent on comparisons of fragmentary images with extant plants.

The reconstruction demonstrates that these plants developed roots in an entirely different way than extant plants develop roots today. The rooting axes of A. mackiei are the earliest known types of plant roots.

“These are the oldest known structures that resemble modern roots and now we know how they formed. They developed when a shoot-like axis formed a fork where one prong maintained its shoot identity and the second developed root identity,” says Dolan.

This mechanism of branching, called “dichotomous branching,” is known in living plants within tissues that share structural identity. However, as Dolan stresses: “No roots develop in this way in living plants, demonstrating that this mechanism of root formation is now extinct.” Their findings demonstrate how a now extinct rooting system developed during the evolution of the first complex land plant.

“100 Years after the discovery of the fossils in Rhynie, our reconstruction demonstrates what these enigmatic plants really looked like! The reconstruction also demonstrates how the roots formed” exclaims GMI group leader Liam Dolan, co-corresponding author on the work.

Understanding the structure and evolution of these plants from the Early Devonian period provides us with an insight into events at a key time in Earth history just after plants colonized the dry surfaces of the continents as they began to spread – radiate – across the land.

“Their evolution, radiation, and spread across all continents had a dramatic impact on the Earth system. Plant roots reduced atmospheric CO2 levels, stabilized the soil and revolutionized water circulation across the surfaces of continents,” states first author and co-corresponding author Alexander (Sandy) J. Hetherington, group leader at the University of Edinburgh. At the root of the environmental and ecological impact of the plant, evolution are the plant roots themselves!

Hetherington highlighted how his research was enabled by fossils that were collected by generations of palaeontologists that are housed in many different museums and universities.

“The answers to so many of the key questions of evolution are lying in shelves in these institutions,” said the scientist who is now based at the University of Edinburgh. “Using digital 3D techniques it is possible for the first time to visualize the complex body plan of A. mackiei allowing us to discover how these enigmatic plants developed. It was brilliant to finally see details that had previously been hidden.”