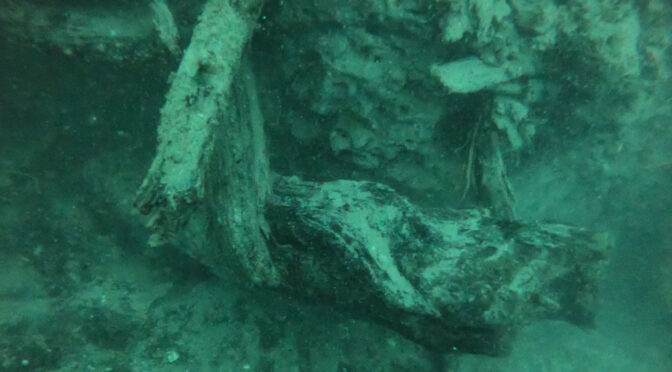 Roughly 60,000 years ago, pre-historic human beings started to migrate from Africa and shared hunting places and cave residences with Neanderthal populations in what is today Europe.

Meanwhile, on the other side of the world, a vast cypress tree forest carpeted riverbanks off the coast of Alabama in Mobile Bay in the Gulf of Mexico.

In 2004, Hurricane Ivan ripped up the Gulf Coast and revealed the ancient forest, which was found 60 feet below the surface water of Mobile Bay, the ancient underwater forest of withering trees and the shipworms they produce is buried under invasive sediments and sea waters.

The Ancient Secrets of Modern Medicine

A recent Ben Raines documentary film produced by This is Alabama reveals how dive shop owner Chas Broughton first discovered evidence of the ancient forest and invited an environmental journalist and scientists from the National Oceanic & Atmospheric Administration ( NOAA) to assess his find.

The results were published on the NOAA Ocean Exploration & Research website, saying this ancient submerged forest has remained undisturbed for thousands of years and that it holds “the secret to the creation of new medicines .”

A report in Nature World News says Dr. Kristine DeLong from the Louisiana State University (LSU); marine scientist Robin Cobb from LSU; and Dr. Grant Harley, a dendrochronologist from the University of Southern Mississippi collected and analyzed tree samples to determine the type of marine environment in which the forest had been entombed, and what the climatological conditions were like when the forest was alive.

A sample of tree sap was recovered from within the bark of one tree, that when cut released resin strong enough to “permeate the air” and the tree’s fibers and growth rings were still visible.

Dr. Harley said the tree’s growth rings were narrower and were more uniform in size than those of modern cypress trees, indicating the environment was much colder than our current climate, and Dr. DeLong radiocarbon-dated the sample at 40,000-45,000 years old.

Last December, NOAA-funded an expedition of scientists from the University of Utah and Northeastern University, and marine and environmental sciences professor Brian Helmuth, who determined that the ancient trees were very well preserved under sediment layers that had prevented oxygenation and decomposition.

It was Francis Choi, a senior lab manager at Northeastern University Marine Science Center, who looked at organisms buried within the wood and discovered 300 ancient animals.

The Anti-Viral Property of Ancient Shipworms

Sometimes called “termites of the sea,” shipworms are tiny marine bivalve mollusks(saltwater clams) with long, soft, naked bodies, and they are notorious for boring into wood immersed in sea water. As these worms bore their way into organic matter, what comes out the other end is converted into animal tissue.

In this study, one hundred bacterial strains from shipworms, many of which were novel, were dated to being at least 60,000 years old.

The team of scientists DNA-sequenced 12 of the strains, determining that they could be applied in the creation of new antibiotics for treatment against “parasites, pain and anti-cancer drugs, antimicrobial activity, and possibly anti-viral drugs”, according to University of Utah medicinal chemistry research professor Margo Haygood.

This is not the first time scientists have studied shipworms in a medical context, in 2017 a paper by Northeastern University scientists titled “’Unicorn’ shipworm could reveal clues about human medicine, bacterial infections” was published by Science Daily.

Researchers discovered a “dark slithering creature four feet long” dwelling in foul mud in a remote Philippines lagoon and this “giant shipworm”, with pinkish siphons at one end and an eyeless head at the other was said to have added to the scientific understanding of how “bacteria cause infections and, in turn, how we might adapt to tolerate, and even benefit from them.”

According to East Idaho News, the COVID-19 pandemic has put a stop to diving at the ancient forest site in the Gulf of Mexico, but Dr. Choi and his team plan to launch unmanned underwater robots to provide 3D visualizations of the forest and Dr. Haygood and her team plan to study more tree samples next year, which NOAA said might have applications in “textile, paper, food, renewable fuel, animal feed, and fine chemical production.”