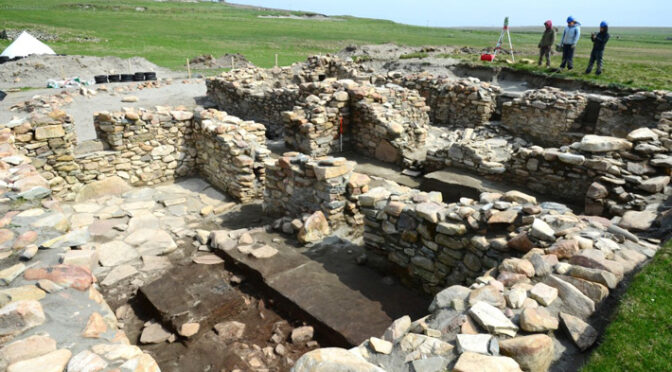 According to a report in The Scotsman, Gerry Bigelow of Bates College and his colleagues have found evidence that someone returned to live in the Shetland island settlement of Broo after it was buried under more than six feet of sand in the late seventeenth century.

It became known as the ‘Arabian Desert in the North” with visitors making their way to Broo to witness this new surreal landscape that emerged.

Archaeologists working on-site over a number of years have dug out more than two metres of sand to excavate the main house of the settlement with three other buildings also of interest.

They have now revealed they believe that someone returned to the site in the years after it was abandoned to make a home in a submerged outbuilding, even building a staircase to allow them to get over the new ‘dunes’ that surrounded them.

Evidence of life at Broo has also been found, with shards of clay pipe and pottery discovered along with animal bones, coins – possibly dropped by visitors – and elephant artefacts that were probably owned by the wealthy Sinclair family who headed the township.

Dr Gerry Bigelow, of the Shetland Islands Climate and Settlement Project and a visiting reader at the Archaeology Institute of the University of Highlands and Islands, said: “We have had to get through two metres of sand to get to the original levels of the township. It has taken us years. It is really very dramatic when you see what is there.”

Dr Bigelow said life must have been “pretty grim” for the people – or person- who returned to the settlement after the residents had fled.

He added: “You would have to climb out of your house onto the landscape that keeps rising. They did not abandon the house until the sand reached the eaves of the roof.

“We don’t know who lived there, or why. They were out in a dune field, there was sand all around, but someone kept living there.

“It is difficult to say exactly what was going on but even though the land was ruined, it still had value to someone. It may have been that someone just needed somewhere to live.”

Part of the research is to understand why sand engulfed the community, who lived around 2 kilometres inland from the beach at Quendale.

Climate change is a key area of interest, with the effects of the Little Ice Age of 1645 to 1715, when temperatures in Scotland were 1.5 to 2 degrees Celsius cooler than they were today, of particular focus.

“We are also interested if humans were using the landscape in such a way that made them vulnerable to storms.”

One theory is that islanders may have been using sand to grow some crops, with it is known that certain types of oats did well in this type of environment, or that rabbits destroyed the protective dune system.