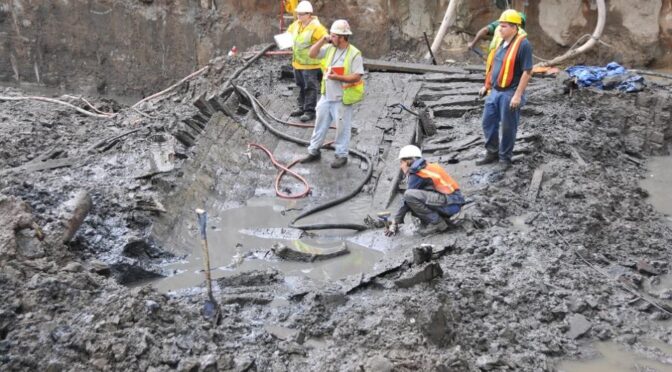 Researchers long stumped by the mysterious history of an 18th-century ship uncovered at the World Trade Center have finally discovered its origins — thanks to tree rings, according to a new study.

The massive wooden ship — the skeleton of which was unexpectedly discovered 25 feet below street level in the muddy excavation of the World Trade Center site in 2010 — has now been traced to Colonial-era Philadelphia, with a history linked to Independence Hall, according to a new report from scientists at Columbia University’s Lamont-Doherty Earth Observatory.

Scientists say the wood from the vessel was chopped in 1773 from a forest of white oak trees in Philadelphia, the same type of trees used to build Independence Hall, where the Constitution and Declaration of Independence were signed.

Columbia scientists were able to link the growth rings found in the old wood of the ship with a previously taken sample of wood from Independence Hall, researchers said.

While the majority of the boat was made from white oak, a sample from the keel of the ship was the key to narrowing down its history.

“The keel was actually made from hickory, which was only found in the Eastern United States or Eastern Asia, which meant we could really narrow down our search — East Asia wasn’t really a possibility,” Pederson said. “That discovery really put me in a good mood — and put us in a good geographic zone.”

The ship’s 32-foot hull was carefully dug out of the muck in July 2010, exhaustively documented, disassembled, and sent off for preservation at the Maryland Archaeological Conservation Laboratory. Some timber samples, however, were sent to Columbia for analysis.

Historians believe the vessel was likely a merchant ship, in the Dutch style of a Hudson River sloop. It likely traveled along the Atlantic, bringing wood and food down to the West Indies and returning with sugar, salt, molasses, and rum.

The ship suffered an infestation of Teredo worms while in the Caribbean, which likely ate away at its wood and led to its demise after about 20 to 30 years on the water. It’s believed that by 1797, the boat was buried in the landfill used to extend Manhattan’s shoreline westward.

Hundreds of artifacts were found in and around the boat, including ceramics, musket balls, a buckle, a British button, a coin, animal bones, dozens of shoes, and a human hair with a single louse on it.

The ship remains at the Maryland Archaeological Conservation Laboratory, and researchers say it’s possible it may eventually be reassembled.