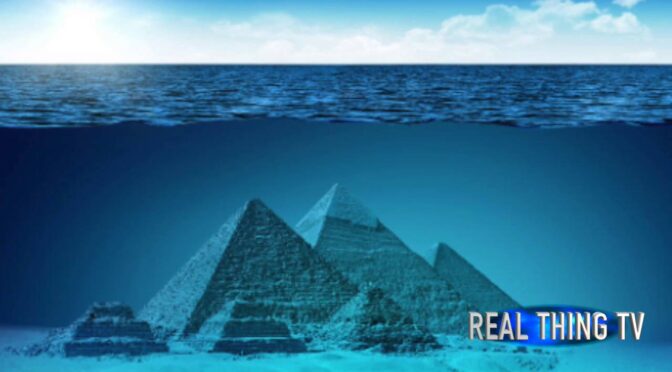 The Bermuda Triangle: mysterious, unworldly, sometimes deadly. For decades intrepid researchers delved into the maze of mysteries hidden deep within this most enigmatic place on Earth.

Some speculate the bizarre time anomalies, disappearances and weird phenomena can be explained by natural occurrences. Others are insistent that relics of an advanced, unknown culture left behind fantastic technology…great energy machines that literally warp spacetime and open portals to other realities.

Now American and French explorers have made a monumental discovery: a partially translucent, crystal-like pyramid rising from the Caribbean seabed— its origin, age, and purpose completely unknown.

A gigantic structure, perhaps larger than the Great Pyramid of Cheops in Egypt, and initially identified by a doctor in the 1960s, has been independently verified by diving teams from France and the U.S.

The discovery has rocked scientists around the world. Will they rush to investigate it? No, they’re more likely to studiously ignore it. If pressed, they’ll officially position themselves as highly skeptical—especially in light of the potential ramifications.

The pyramid could confirm some engineers’ contentions that pyramids were originally created as massive power sources, support the claim that the ancient city-state of Atlantis did exist, or even provide answers to the mysterious goings-on that have been recorded since the 19th Century in the region of the Atlantic dubbed the Bermuda Triangle.

According to history, the pyramid was accidentally discovered during 1968 by a doctor of naturopathy, Ray Brown of Mesa, Arizona.

Brown was in the Caribbean on vacation and making dives with friends in a region off the Bahamas known as “the Tongue of the Ocean.”

The area acquired that name because a tongue-shaped portion of the seabed extends out from the island before sharply dropping off into much greater depths.

When relating his discovery, the doctor explained he became separated from his diving friends underwater. While attempting to rejoin them he came upon a massive structure rising from the ocean floor: a black, hulking object silhouetted against the lighter sun-filtered water. The object was shaped like a pyramid.

Because he was low on air, he didn’t spend much time investigating the pyramid but did find a strange crystal sphere.

He brought it to the surface with him and later when the ancient crystal was studied researchers were astonished by its properties.

Is the crystal pyramid causing the Triangle phenomena?

Some Triangle researchers have theorized for years that a strange energy source exists at the bottom of the sea within the region of the ocean affecting planes, ships, and boats.

A few investigators postulate that if the fabled Atlantis really did exist the remains of its mythical energy-vortex machine might still be intact at the bottom of the ocean. Such a machine, they claim, would likely be pyramidal-shaped and the original historical template that succeeding cultures around the globe copied much later.