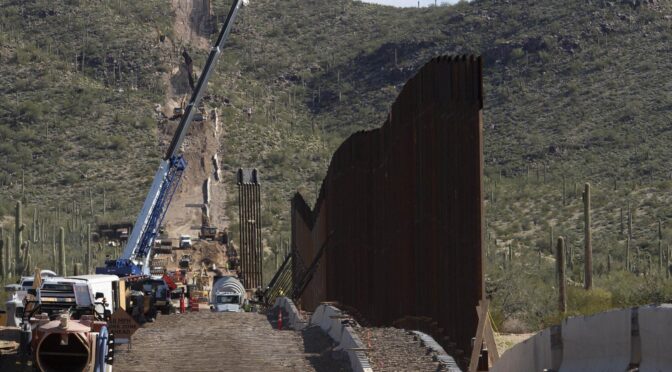 It was alleged that Sacred Native American burial sites in a national monument were blown up to create President Trump’s border wall. Construction teams in southern Arizona began to blast hills at the National Monument of the Organ Pipe Cactus to clear way to the current border wall project.

Crews are bulldozing through Monument Hill to create a 30-foot steel wall along the US-Mexico border without consulting the Native American community whose ancestral land lies on part of the wall’s path, it is claimed.

‘Controlled blasting’ has been carried out for the construction of the wall which is part of a 43-mile project on national monument land about 115 miles west of Tucson, officials said.

A congressman whose district includes the reservation has said the Department of Homeland Security had ‘failed in its legal obligation to consult with the tribes.

Grijalva, chairman of the House Natural Resources Committee, visited the location ahead of the construction and described the site in a video posted to social media. Monument Hill, where he said explosions are now occurring.

In a video posted, Grijalva said: ‘Where they were blasting the other day on Monument Hill is the resting place for primarily Apache warriors that had been involved in the battle with the O’odham.

‘And then the O’odham people in a respectful waylaid them to rest on Monument Hill.  DHS has consistently failed in its legal obligation to consult with the tribes, and this is only the latest example.’

He also sent a letter to the acting head of the Department of Homeland Security, Chad Wolf, to express ‘serious concerns’ about the construction project. Organ Pipe was designated as an International Biosphere Reserve by the United Nations and is part of the national parks system, officials said.

‘The controlled blasting is targeted and will continue intermittently for the rest of the month.’

Environmental advocates, elected officials and Tohono O’odham Nation leaders have raised concerns about the project, including the destruction of saguaros, the use of water from an underground aquifer, the potential impact on migrating animals and the destruction of land consider sacred by some Native Americans.

The Army Corps of Engineers reported that the Department of Defense awarded $891 million in contracts to Southwest Valley Constructors in May to build the border wall on Organ Pipe and Cabeza Prieta National Wildlife Refuge.

The US government plans on replacing barriers through 100 miles of the southern border in California and Arizona, including through a national monument and a wildlife refuge, according to documents and environmental advocates.

Barriers will go up at the monument, a vast park named after the unique cactus breed that decorates it, and Cabeza Prieta, which is largely a designed wilderness home to 275 wildlife species. The government will also build new roads and lighting in those areas.

The Department of Homeland Security last May again waived environmentally and dozens of other laws to build more barriers along the US-Mexico border.

Environmental advocates who have sued to stop the construction of the wall say this latest plan will be detrimental to the wildlife and habitat in those areas.