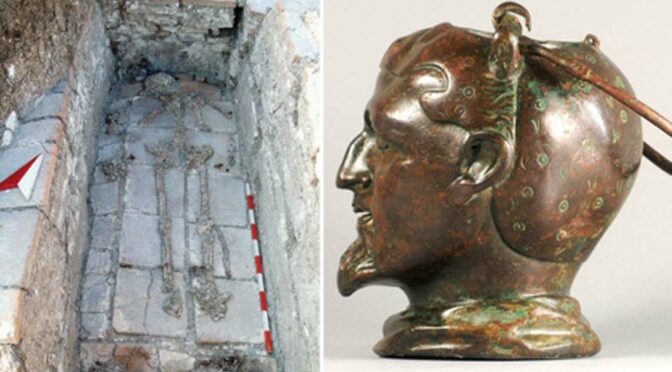 A 3rd-century A.D. man’s grave in Bulgaria contained a strigil and curiously crafted balsamarium- a vessel from skin- cleansing oils- in the shape of a man’s head fitted with a feline-skin cap, which may be a reference to the Nemean lion slain by Hercules.

In a Roman-era grave in Bulgaria, a unique brass vessel in the form of a man’s head was discovered. The tomb was found in the Kral Mezar tumulus in southeastern Bulgaria, near the village of Boyanovo.

Over the centuries the tumulus had been repeatedly plundered and agricultural activities changed their shape and size,  so a salvage archaeology mission was undertaken in 2015 to excavate it thoroughly.

Inside the tumulus, archaeologists discovered three burials — a sarcophagus, a brick grave, and a tomb. The limestone sarcophagus with a pitched roof lid (found broken on the side) dates to around 150-200 A.D. Sarcophagi are rare finds in Roman Thrace and are believed to have contained the remains of non-Thracians.

The tomb was built of stone and brick with plastered and painted interior walls. It was heavily looted, but the extant funerary goods include bone spindles, needles, glass beads, glass, and ceramic fragments and clay lamp fragments.

A silver denarius from the reign of Caracalla minted in 202 A.D. was found on the tomb floor. Because of the textile-making grave goods, archaeologists believe this was a woman’s tomb.

But it was the third burial, the brick grave, that contained a truly striking artifact. The rectangular pit was lined with bricks coated with a thick layer of white plaster.

Marks on top of the brick walls indicate there had once been wooden beams across the top forming a flat roof. This type of grave was popular in Roman Thrace, particularly in the 2nd and 3rd centuries.

The body had been placed in a wooden coffin of which only a few iron nails survive. The skeletal remains are still articulated and just shy of six feet long (1.82 meters). The osteological analysis found the deceased was an adult male about 35-40 years old at the time of death.

Inside the grave was a bronze coin of Caracalla minted in Hadrianopolis 198-217 A.D., fragments from a glass flask, the remains of two pairs of hobnailed shoes, a balsamarium, and a strigil.

“In our opinion, the grave belongs to a Thracian aristocrat, who has practiced sport in his everyday life, rather than to a professional athlete,” Daniela Agre, an archaeologist at the National Archaeological Institute with Museum at the Bulgarian Academy of Sciences, who led archaeological work at the site, told Live Science.

“We think that the tumulus was used as a family necropolis and the deceased was a part of this family,” Agre said.

This type of container is believed to have been used to hold scented oils or perfumes for use in the baths, which is why they’re often found coupled with strigils that would have scraped the oil off the skin to clean and exfoliate.

It is 4.7 inches high, 4.2 inches wide and is shaped like the head of a man wearing an animal-skin skullcap. The visible features of the animal’s head — nostrils, eyes, canine teeth in the lower jaw — suggest it was a feline.

A neck draped with robes forms the foot of the vessel with a flat bottom made from a single metal sheet. There’s a hole in the top of the head for a hinged lid that is now lost. On either side of the opening are loops where a swing handle was attached. There’s still a handle attached through one of the loops; the other side of the handle is broken.

The man’s face is broad with shaved cheeks and a neatly shaped goatee. His nose viewed from profile has a proud aquiline bump. Seen from the front, it is bent to the left and widened at the base, suggesting that it has seen the business end of more than a few clenched fists. Five vessels with comparable features are found in museums in Los Angeles, France, and Germany.

Scholars believe these features — the bent aquiline nose, the goatee, the skullcaps, the lock of hair on the back of the head — represent the heads of boxers or wrestlers.