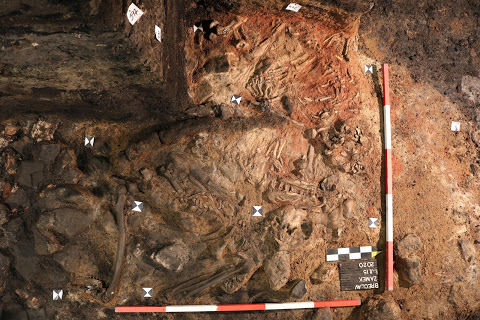 In the 1,000-year-old ruins of Breslov Castle in Southern Moravia, archeologists have confirmed that three skeletons have been identified as victims of ritual killings.

The archaeologist Miroslav Dejmal said: “The individuals had been buried in the foundations of the older phase of the rampart right at the time of its construction.

“In very extreme positions, the three skeletons were found close to one another and were probably tied together.”

“These unfortunates seem to have fallen victim to some drastic pagan practice, or murder”, explains Dejmal. “It is hard to imagine that all three died at the same time by accident. And most importantly, placing them on the first layer of stones of the newly rampart and the position of the bodies, suggests they were in fact sacrificed.”

The Sacrificial Origins of Haunted Houses

Dejmal explains that the men had been placed on the first layer of stones of a newly constructed rampart and their positions also suggested they were sacrificed.

Next week a team of anthropologists will attempt to shine light on the mystery of the three sacrificed men, to learn if they were local and perhaps related, and the archaeologist said it is possible they were prisoners of war enslaved into building the stone walls before being sacrificed or executed.

Archaeologists use the term “foundation sacrifice” when referring to burying a human being beneath, within or upon the foundations of buildings.

An article on JSTOR says in medieval times building a structure was an “affront to the spirits and deities of the land” and to appease them, sacrificial rituals were performed.

Believed to have been transformed by death, the sacrificed became protective spirits that guarded the buildings in which they were entombed, and this concept according to Seán Ó Súilleabháin in his 1945 paper “ Foundation Sacrifices ” is perhaps “the root of our modern haunted-house tales.”

Child Trafficking in the 11t​h Century

According to Alan Dundes 1995 paper published in The Journal of American Folklore , all across the Balkans, ballads about foundation sacrifices are so renowned that variants of the tale have been embraced as part of national identity in Hungary, Romania, Serbia, and Greece (among other places).

An Albanian version of the tale “ Rozafa’s Castle ,” tells of “three brothers” laying the walls of a mighty fortress when old man said “the castle spirit seeks a human life.”

And there is plenty of evidence for foundation sacrifice substitution where empty coffins buried under houses representing the dead and coins, eggs, books, candles, bottles of wine and playing cards were used as sacrificial substitutes.

An example of human sacrifice is found in the history of the small village of Vestenberg, 2 1/2 hours from Ansbach in Germany, where a large hill surrounded by a deep moat holds the foundations of ancient stone towers built by the Vestenbergs, the wealthiest family of medieval Franconia.

According to D. L. Ashliman of the University of Pittsburgh, in his paper Human Sacrifice in Legends and Myths , an eighty-year-old woman said that when Vestenberg Castle was being built, the mason built a seat into the wall for a small child whose mother had given it up to be sacrificed for “a large sum of money.”

Return to the Ancient Murder Scene

Returning to the Lednice-Valtice valley, and the early 11th-century building of Břeclav castle, considering how commonplace and widespread foundation sacrifices were at that time, the question of the three men chained together upon the first layer of foundation stones is no longer a mystery as much as it is a point of newfound archaeological interest.

As soon as next week, a new team of archaeologists and anthropologists will head to South Moravia to begin their quest aimed at illustrating the circumstances of their deaths, but they are quite convinced that they will find further layers of evidence of sacrificial ritual.