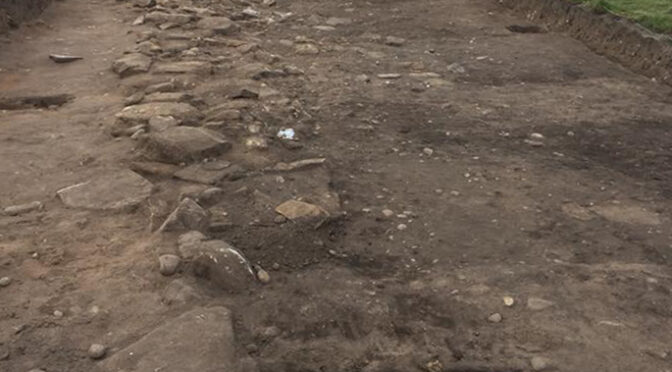 Archaeologists working at the site of Scotland’s largest Pictish fort have made an “incredible” discovery after unearthing part of the power center’s defensive wall.

The discovery has been made at Burghead in Moray, the largest known fort of its kind in northern Britain which is believed to have been occupied by the elite of Pictish society more than 1,000 years ago.

Around 10 feet of rampart wall has been unearthed with preserved pieces of timber lacing, which strengthens the structure, also found. It is now known that the wall dates to the 8th Century – putting it right at the heart of the Pictish period.

Dr. Gordon Noble, head of archaeology at Aberdeen University, who is leading the work at Burghead said it was an “incredible” find. He added: “What a sight to see the rampart revealed for the first time in over 1000 years.“It’s very impressive.

Probably one of the best-preserved ramparts of this type.“It really reinforces the huge investment in resources that was undertaken to construct the fort at Burghead.

The timber lacing is one of the best preserved in Europe.“Unfortunately, it is also under huge threat from coastal erosion with meters lost to the sea in the last few decades.

The Wallface now stands around a meter from an active erosion face.“Historic Environment Scotland is providing funding to help record as much as we can before the erosion gets worse.”

It is believed the site at Burghead may been one of the most important elite settlements of the Kingdom of Fortriu which was the Pictish overkingship from the 7th century onwards.

Dr. Noble, who has led excavations at Burghead since 2015, said the picture of life at the fort and village was “getting clearer” but that a lot of work still needed to be done.“We now know a little about the architecture of the buildings inside, but not how many there were and need to know more about the phasing of the site,” he added.

The stretch of the wall now unearthed at Burghead contains several beam slots that supported the wooden structure of the fort.Dr. Noble said “abundant charcoal” had been recovered during the excavation indicating that the fort was destroyed by fire.

It has long been thought the fort was razed to the ground around the time Vikings were launching raids along the Moray coast. However, the act of destruction has actually preserved some of the wooden remains with charcoal deposits helping to date the structure more accurately.

Important finds made at the site include the Burghead Bull carvings and an underground well, both which were found in the 1800sIt was thought that much of the site was destroyed when a new town was built on the site of the fort in the 19th Century but Dr. Noble and colleagues have since found remains of a Pictish longhouse, coins, and pottery.