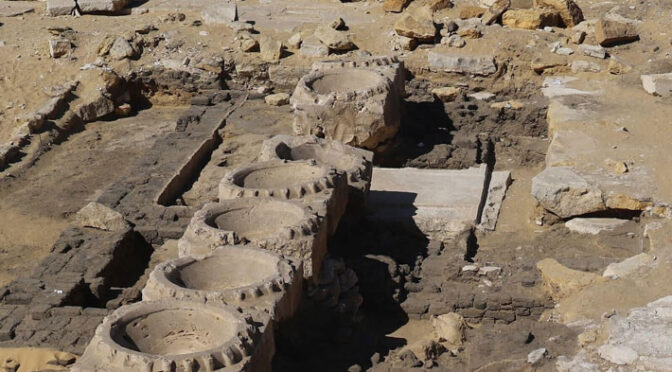 Temple Dedicated to the Sun God Unearthed in Egypt

Archaeologists have unearthed the remains of a 4,500-year-old temple dedicated to the Egyptian sun god Ra at the site of Abu Ghurab, about 12 miles (20 kilometres) south of Cairo.

The temple was built sometime during ancient Egypt’s fifth dynasty (circa 2465 B.C. to 2323 B.C.) — a “period in which the cult of the sun reached its apex with the construction of a new type of monument specifically devoted to the sun god, commonly known as ‘Sun Temple,'” said Massimiliano Nuzzolo, co-director of the archaeological dig and a researcher at the Institute of Mediterranean and Oriental Cultures of the Polish Academy of Sciences in Warsaw. He co-directs it with Rosanna Pirelli of the University of Naples “L’Orientale” in Italy.

The sun cult was a powerful cult in ancient Egyptian religion. In later times, Ra merged with Amun — the chief god of Thebes (Luxor) — to form Amun-Ra who was regarded, at least by some Egyptians, as being the most powerful of the Egyptian gods.

He was worshipped until around 1,500 years ago when Egyptian polytheism became extinct.

The newly uncovered sun temple was made from mud bricks and measured at least 197 feet long and 66 feet wide (60 meters by 20 m). It contained an L-shaped entrance portico, a courtyard, storage rooms and rooms that may have been used for cultic purposes, Nuzzolo told Live Science in an email.

“The walls of this building were all plastered in black and white and often also show traces of painting in red and blue,” Nuzzolo said.

The entrance portico was partially made of white limestone and had two limestone columns.

The temple was ritually demolished, possibly before it was even finished, so a new sun temple could be made from stone at the site for a pharaoh named Niuserre (reign circa. 2420 B.C. to 2389 B.C.). Niuserre “reused part of the structure as a platform or sub-foundation for his new temple,” Nuzzolo said.

The archaeologists found two deposits of artefacts, one of which has dozens of intact beer jars and a few finely made and red-slipped vessels, while the other contains seal impressions, including the seals of pharaohs who ruled during the fifth and sixth dynasties.

One of the earliest seals belongs to Shepseskare, an “enigmatic” pharaoh who ruled Egypt before Niuserre, Nuzzolo said.

Archaeologists aren’t sure which pharaoh began construction of the mud brick sun temple, but it was likely either Shepseskare or Raneferef, Nuzzolo said.

Little is known about the rituals that were performed inside Egyptian sun temples like this one. “We know almost nothing of the cult rituals carried out in the sun temples,” Nuzzolo said. “[We also don’t have] enough data to understand what was the daily life of the people living around these temples.”

This discovery is not entirely new, as 19th-century German archaeologists found a “very small part” of the mud brick sun temple, according to Nuzzolo. The latest excavation uncovered the rest of the temple between 2019 and 2022. You can find out more about the dig on the team’s website.