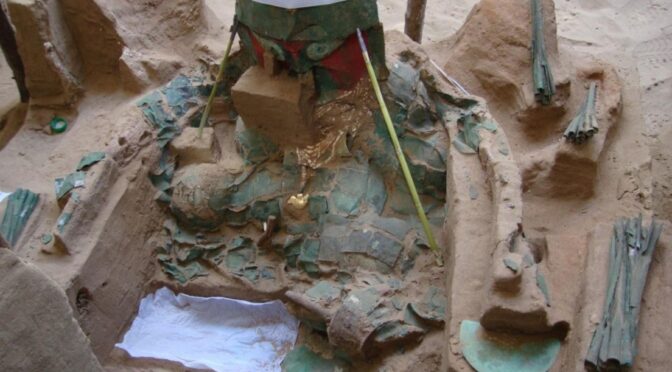 The remains of an individual who served as a surgeon during the Middle Sican period (900-1050 AD) were found by experts from the Sican National Museum in the southern necropolis at the Mausoleum Temple of Huaca Las Ventanas, located in the Pomac Forest Historical Sanctuary in the province of Ferreñafe, Lambayeque region.

The funerary bundle No. 77 featured an individual who served as a surgeon. This is the first discovery of this type in the country’s northern region.

Sican National Museum Director Carlos Elera reported that this discovery was made as part of archaeological investigations initiated between 2010 and 2011 in the southern necropolis at Huaca Las Ventanas.

“This was a research project carried out by the Museum between 2010 and 2011; the context and part of it, which was covered with soil and sand, were partially removed, and we decided to bring it in a box because the river (La Leche River) was going to destroy part of this Huaca,” Elera told Andina news agency.

“So, taking advantage of the fact that there was a donation from the National Geographic Fund last year, we decided to excavate what had been documented at the funerary bundle of the external middle part,” he added.

The investigation was restarted in October 2021 and ended in January this year at the Sican Museum.

“This individual is of Middle Sican cultural affiliation.

The funerary bundle included a golden mask pigmented with cinnabar, as well as a breastplate and a kind of poncho with copper plates and a gold hair remover,” he explained.

According to the museum’s director, there was a bottle —with two spouts and a bridge handle featuring a figure representing the Huaco Rey (King Huaco)— under the poncho.

“The bundle also included gilt copper bowls and a tumi (a ceremonial knife) (…). The most interesting thing was the set of awls, needles, and knives, several of which with a cutting edge on one side and a blunt edge on the other side; the sizes vary and some have wooden handles,” he added.