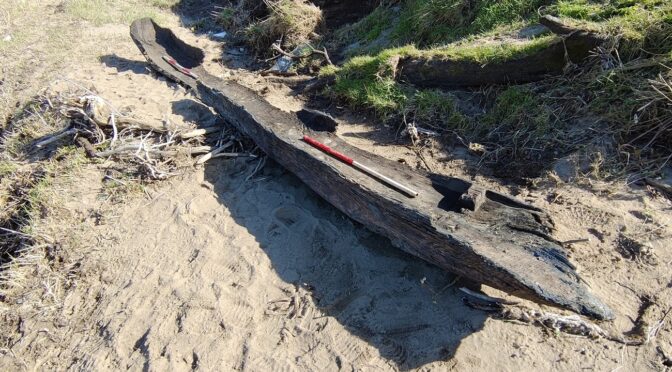 History lies beneath the riverbeds of northwest Ireland. Every so often, when conditions allow, archaeologists are rewarded with another offering from the distant past.

Two more boats understood to be from the medieval era, have emerged from the River Foyle. The boats, known as longboats or dugout boats, were found at a “dugout boat hotspot” near the Lifford Bridge. The bridge connects the towns of Strabane in Northern Ireland and Lifford, in County Donegal in the Republic of Ireland.

Marine archaeologist Dr Niall Gregory said the two boats now bring the total number found at this particular section of the river to 15. Overall, 21 such boats have been found at the confluence (meeting point) of the Rivers Mourne and Finn into the River Foyle.

Logboat’s are made from hollowed-out trees and can vary in size depending on the tree trunk used, Dr Gregory told BBC News NI.

About 500 log boats have been found across the island of Ireland, he said. One of the largest recorded was found in lower Lough Erne and measured nearly 60ft (18m) long and 3.2ft (1m) wide.

“These two boats found at the Lifford Bridge site were cargo ferry boats,” he said.

“These boats were designed as workhorses, to move and manoeuvre with some degree of agility within a moderate to strong current.

“These two boats are from a dugout boat hotspot where they have appeared over the years, usually after seasonal high-water flows.”

Logboat’s are “notoriously difficult” to date based upon hull size and shape alone, and carbon dating is the only definitive means of obtaining a conclusive date.

Dr Gregory estimates – based on the hull shape, use of medieval nails, distorted wood grain and remains of sapwood on the exterior – that they are of a medieval era.

Previous boats found at the site have been dated from between 600 AD to 1520 AD, he said. Dr Gregory believes these boats, from their characteristics, are more likely to be later rather than earlier in that range.

Eamon Logue, from the Strabane-Lifford Anglers Association, was one of the first people to stumble across the uncovered remains.

Speaking to BBC Radio Foyle’s Mark Paterson Show, Mr Logue said one of the boats seemed in such miraculous condition that it looked like someone had parked it there.

“Me and a friend were just taking dander down the River Foyle.

“We were about 100 yards down the bank and we have just seen it, at the side of the river, like someone had parked it there.

“There were big floods just a few weeks before, we think it has either been dislodged or the bank has caved away and exposed it.

“We have walked this river for years and found different bits but this was different.”

Nail and timber samples from the boats have now been sent to Dr Rena Maguire of Queen’s University Belfast.

Dr Maguire, who is a metallurgical specialist, will undertake an analysis of the nails and also radio-carbon date the timbers to get a more exact date. Only time will tell if, or rather when, more of these boats will reappear along the banks of the Foyle.