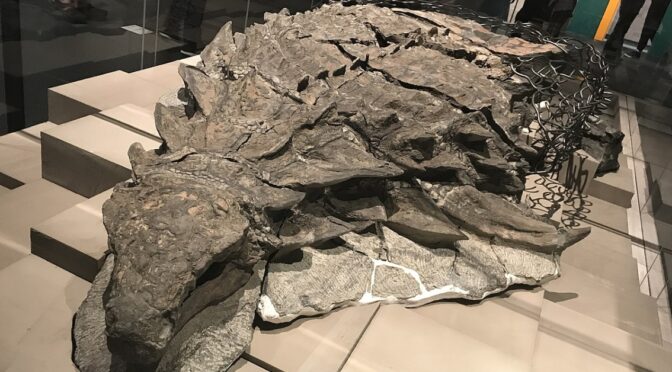 The Amazing Dinosaur Found (Accidentally) by Miners in Canada

This armored plant-eater lumbered through what is now Western Canada about 110 million years ago until a flooded river swept it into the open sea. The dinosaur’s undersea burial preserved its armor in exquisite detail. Its skull still bears tile-like plates and a gray patina of fossilized skins.

A heavy equipment mechanic named Shawn Funk cut his way through the earth in the afternoon of March 21, 2011, without knowing that he would encounter a dragon soon.

That Monday had started like any other at the Millennium Mine, a vast pit some 17 miles north of Fort McMurray, Alberta, operated by energy company Suncor.

Hour after hour Funk’s towering excavator gobbled its way down to sands laced with bitumen—the transmogrified remains of marine plants and creatures that lived and died more than 110 million years ago. It was the only ancient life he regularly saw. In 12 years of digging he had stumbled across fossilized wood and the occasional petrified tree stump, but never the remains of an animal—and certainly no dinosaurs.

But around 1:30, Funk’s bucket clipped something much harder than the surrounding rock. Oddly colored lumps tumbled out of the till sliding down onto the bank below. Within minutes Funk and his supervisor, Mike Gratton, began puzzling over the walnut brown rocks. Were they strips of fossilized wood, or were they ribs? And then they turned over one of the lumps and revealed a bizarre pattern: row after row of sandy brown disks, each ringed in gunmetal gray stone.

“Right away, Mike was like, ‘We gotta get this checked out,’ ” Funk said in a 2011 interview. “It was definitely nothing we had ever seen before.”

Nearly six years later, I’m visiting the fossil prep lab at the Royal Tyrrell Museum in the windswept badlands of Alberta. The cavernous warehouse swells with the hum of ventilation and the buzz of technicians scraping rock from the bone with needle-tipped tools resembling miniature jackhammers. But my focus rests on a 2,500-pound mass of stone in the corner.

At first glance, the reassembled gray blocks look like a nine-foot-long sculpture of a dinosaur. A bony mosaic of armor coats its neck and back, and gray circles outline individual scales. Its neck gracefully curves to the left, as if reaching toward some tasty plant. But this is no lifelike sculpture. It’s an actual dinosaur, petrified from the snout to the hips.

The more I look at it, the more mind-boggling it becomes. Fossilized remnants of skin still cover the bumpy armor plates dotting the animal’s skull. Its right forefoot lies by its side, its five digits splayed upward. I can count the scales on its sole. Caleb Brown, a postdoctoral researcher at the museum, grins at my astonishment. “We don’t just have a skeleton,” he tells me later. “We have a dinosaur as it would have been.”

Paleobiologist Jakob Vinther, an expert on animal coloration from the U.K.’s University of Bristol, has studied some of the world’s best fossils for signs of the pigment melanin. But after four days of working on this one—delicately scraping off samples smaller than flecks of grated Parmesan—even he is astounded. The dinosaur is so well preserved that it “might have been walking around a couple of weeks ago,” Vinther says. “I’ve never seen anything like this.”

“That was a really exciting discovery,” says Victoria Arbour, an armoured-dinosaur palaeontologist at Canada’s Royal Ontario Museum. Arbour has seen the fossil at various stages of preparation, but she’s not involved in its study. “It represents such a different environment from today and such a different time, and it has great preservation.” (Arbour has begun studying a similarly well-preserved ankylosaur found in Montana in 2014, much of which remains hidden within a 35,000-pound block of stone.

Arbour and her colleague David Evans published a description of the Montana ankylosaur, naming it Zuul crurivastator—”Zuul, destroyer of shins”—after the monster in the film Ghostbusters.)

The afterword of the discovery raced up the ladder at Suncor, the company quickly notified the Royal Tyrrell Museum. Henderson and Darren Tanke, one of the museum’s veteran technicians, scrambled aboard a Suncor jet and flew to Fort McMurray. Suncor excavators and museum staff chipped away at the rock in 12-hour shifts, shrouded in dust and diesel fumes.

They eventually whittled it down to a 15,000-pound rock containing the dinosaur, ready to be hoisted out of the pit. But with cameras rolling, disaster struck: As it was lifted, the rock shattered, cleaving the dinosaur into several chunks. The fossil’s partially mineralized, cakelike interior simply couldn’t support its own weight.

Tanke spent the night devising a plan to save the fossil. The next morning Suncor personnel wrapped the fragments in plaster of Paris, while Tanke and Henderson scrounged for anything to stabilize the fossil on the long drive to the museum. In lieu of timbers, the crew used plaster-soaked burlap rolled up like logs.

The MacGyver-like plan worked. Some 420 miles later the team reached the Royal Tyrrell Museum’s prep lab, where the blocks were entrusted to fossil preparator Mark Mitchell. His work on the nodosaur has required a sculptor’s touch: For more than 7,000 hours over the past five years, Mitchell has slowly exposed the fossil’s skin and bone. The painstaking process is like freeing compressed talcum powder from concrete. “You almost have to fight for every millimeter,” he says.

Mitchells fight is nearly over, but it will take years, if not decades, to fully understand the fossil he uncovers. Its skeleton, for example, remains mostly obscured in skin and armor. In some ways it’s almost too well preserved; reaching the dinosaur’s bones would require destroying its outer layers. CT scans funded by the National Geographic Society have revealed little, as the rock remains stubbornly opaque.

In May the Royal Tyrrell Museum unveils the nodosaur as the centerpiece of a new exhibit of fossils recovered from Alberta’s industrial sites. Now the public is marveling at what has wowed scientists for the past six years: an ambassador from Canada’s distant past, found in a moonscape by a man with an excavator.