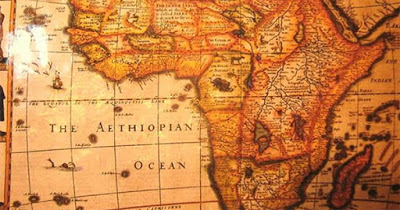 The roots of such etymology can be described by how over time, areas referred to as place names often expand or contract. As such, what is termed “toponymic displacement” or geographic displacement? becomes commonplace.

European geographers used the term ‘Libyan’ to refer to North African people of Berber background. The people who inhabited lands further south of the Sahara were called ‘Ethiopians’ (or Aethiopians) and the name used for the lands below the Sahara was ‘Ethiopia.’

Ethiopia was also used as the synonym for the Nubian Kingdom of Kush (or Meroe).

The present country called Ethiopia was hardly known, and when it came to the knowledge of European geographers it was called ‘Abyssinia’ (from the Arabic ethnic designation ‘Habesh.’

The word Ethiopia was also used for unknown or quasi-mythical lands situated to the south or east of the Mediterranean.

The African interior, which was unknown to European ‘explorers’ and geographers around the 15th-16th centuries, was generally called Ethiopia.

In the maps of this time, the Ethiopian Ocean was shown to stretch from the South Atlantic into the western Indian Ocean.

Oceans and seas were conceptualized and titled as strips of water surrounding landmasses.

The discreet naming of oceans surfaced in the 1800s.

Decades after the classical use of the name had become obsolete, botanist William Albert Setchell (1864–1943) used the term for the sea around some islands near Antarctica.