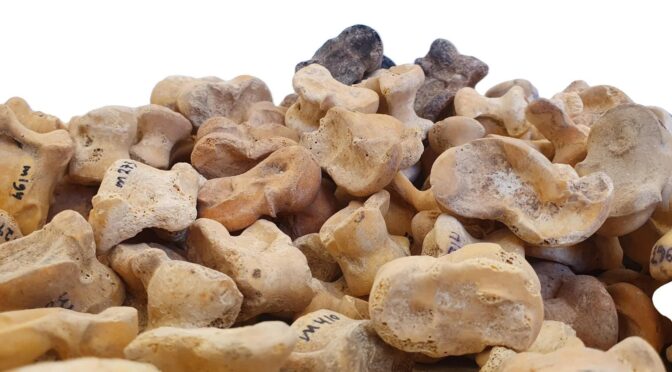 The cache of Ancient Knucklebones Discovered in Israel

In this vale of tears, any help peering into the future would be useful. Now, archaeologists report finding over 600 astragali – small bones from quadruped feet – in the ancient city of Maresha, central Israel. Dating to the city’s Hellenistic period some 2,300 years ago, what the bones were used for must remain in the realm of speculation. But there are clear indications that some were used to attempt to contact the gods and others were used to play games.

Ovine or caprine knuckle and ankle bones, or even artificial versions thereof – and sometimes small bones from cow feet or gazelle as well – were popular throughout the Levant and classical world, and even beyond. However, the amount found in recent excavations in Maresha was unusually large. Their discovery was reported recently in the British archaeological journal the Levant, by Dr. Lee Perry-Gal of the Israel Antiquities Authority, Prof. Adi Erlich of the Zinman Institute of Archaeology at the University of Haifa and Dr. Ian Stern of the Hebrew Union College, Jerusalem.

When one finds bones from the feet of herbivores in a cultural context, they’re usually remnants from meals, Perry-Gal points out. Sheep and goat have been staples in the Levantine diet since their domestication about 10,000 years ago in southeast Turkey. The hint to archaeologists that a bone is more than a bone is when it is found in disproportion, she explains.

Say you find a thigh bone; fine; with it you find a few toe bones, fine; if you find 500 toe bones per thigh bone, you have a phenomenon that begs interpretation, Perry-Gal says.

It bears adding that another vast collection of astragali had been discovered at Megiddo, about 680 of the things. Around the ancient world, sometimes astragali were found in the context of foundation deposits (built into the house foundations), likely because of their association with fortune (hopefully good).

Forecasting and fun in Maresha

Located in the Judean foothills, Maresha appears in the Bible in the context of the inheritance of the tribe of Judah, which included – among many other cited names – “Libnah, and Ether, and Ashan; and Iphtah, and Ashnah, and Nezib; and Keilah, and Achzib, and Mareshah; nine cities with their villages” (Joshua 15:42-44). It was one of the cities King Rehoboam fortified, according to the biblical account, which also cites it as the site of Asa of Judea’s fight against an invading army led by Zerah the Ethiopian.

In the Hellenistic period from the fourth to the second centuries B.C.E., Maresha was not Judahite. It was a multicultural city with as many as four or five different populations living together, Perry-Gal says.

The profession, or art, of divination using knucklebones, is called astragalomancy and, at least in the historic period, the practice was based on markings on the bones: names of gods and goddesses, other words, numbers. The underlying theory is that casting dice – or in this case, small bones – is a way to invoke or contact the superpowers. How the osteo-mediated message from the invoked deity is interpreted is another matter.

Some believe cleromancy using bones goes back to prehistory, in some form, though if it was used before writing, the bones presumably wouldn’t have alphabetic cues. In any case, by the classical period astragali were so prized that “bones” sculpted in glass have even been discovered at Tel Kedesh in Galilee and in ancient Greece, also from the Hellenistic period in the third and second centuries B.C.E. Examples also exist of ersatz astragali in ivory, stone and metal. Bone astragali have also been discovered in ancient Jerusalem.

In fact, Perry-Gal observes, ethnographic studies find astragali used in games to this very day in Australia and the Near East, though just for games: presumably their users have gotten over the hope that deceased feet can serve in divination.

Back to Maresha, the site of the huge collection of astragali dates to the Hellenistic period. Bones for forecasting and fun, as well as some possibly employed in the hope of persuading the deity to torment other people, were found in artificial caves carved into the bedrock of the lower city. Many of the astragali were found, the archaeologists say, in large concentrations in specific caves.

Asked if none were found aboveground, Perry-Gal says Maresha consists of its upper part above ground, of which little remains following serial conquests (as is typical of this region). Beneath the homes, however, people carved caves in the soft limestone. There are hundreds of these caves, which served for sundry purposes, including storage for grains and water cisterns – and possibly worship.

In the context of the perennial unease and hostilities in the Middle East, “all the materials from the domestic areas above-ground were tossed into the underground areas. They became a time capsule,” Perry-Gal explains. So we cannot say whether the astragali of Maresha were used in the glare of sunshine or dank inner sanctums, only a small proportion of which have been excavated.

But there are clues. “In Area 89, underground, there is a small altar with wall etchings, and there we found a huge collection of astragali and ostracons [pottery with writing on it],” Perry-Gal says. “This cave may have served as a place of worship. So the astragali there may not have fallen from above-ground.”

In worshipful contexts one finds astragali bearing the names of Aphrodite and Eros, the great Hera herself, Hermes, and others. Meanwhile, in the domestic neighbourhood of Maresha, the team found astragali bearing the name of Nike, the goddess of fortune, and speculate that those found in that context served to play games. “It’s a peek into their lives,” Perry-Gal says.

“During the Roman and Hellenistic period, astragali were used a lot in divination, at Maresha as well. This amount is extraordinary – especially ones with writing, names of gods and goddesses, found in the context of ostracons of prophecy,” Perry-Gal stresses.

Or parlor games. She suspects that astragali with words like “thief” on them were used in play. Some astragali were weighted with lead (much more than other metals) and likely served in gaming: they would roll better than mere bone, she observes.

Who might have used the astragali for play, prophecy or to (fruitlessly) implement a foul intention? No idea. “Maresha had Phoenicians and Idumaeans and Nabataeans and Jews, though it wasn’t Judahic,” she says. “We couldn’t associate the find with a specific ethos.”

It bears noting that all the ostracons, which are being studied by Dr. Stern, are in Aramaic and include curses and prophecies, but those astragali that bear writing do so in Greek.

Curses? More like formulae: “If you do x, y will happen,” Perry-Gal explains. Sort of an attempt to cajole the gods into doing evil to somebody. Okay, Maresha wasn’t the only Hellenistic city in town. What was so special about it to warrant massive use of astragali – or, at least, such a vast collection of them, relatively speaking?

Possibly, the critical mass was achieved under special conditions of extreme multiculturalism (all those peoples): other places could also be mixed, but the extent here may have been unusual, Perry-Gal suggests. Under the pax Hellenistica, conditions were open, global, tolerant and maybe all that came together at Maresha, which really was a special place – this is the first place in the west that chickens seem to have been cultivated, she adds, back in the third millennium B.C.E.

Apparently the magic in the animal feet did not help the city folk foresee the future. Maresha underwent more upheavals and finally met its maker in the year 40 B.C.E., by the Parthians roaring out of ancient Iran, and activity would move next door to the city of Beit Guvrin.