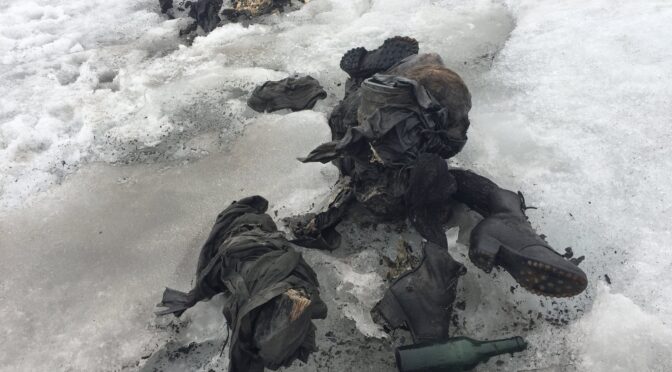 The couple got missing in 1942 found in Melting Swiss Glacier

The bodies of a couple missing for 78 years have been disclosed by a melting Swiss glacier thawed by rising temperatures. It’s not exactly a happy ending for their relatives, but at least it’s an ending, after many decades of uncertainty.

The rural residents who lived near the Diablerets mountains, Marcelin and Francine Dumoulin went out to tend to their cows on 15 August 1942 and never returned. Now DNA matching has confirmed the recovered bodies are the missing couple.

Marceline Udry-Dumoulin, one of her daughters was 4 years old at the time of disappearance and now has 79 years old. She told Le Matin, Sarah Zeines, that she was three times climbing the glacier in the hope of finding traces of her parents

“We spent our whole lives looking for them,” says Udry-Dumoulin. “I can say that after 78 years of waiting for this news gives me a deep sense of calm.”

The couple’s remains were uncovered on the Tsanfleuron glacier above the Les Diablerets ski resort by a ski lift worker, reports the BBC, at a height of 2,615 meters (8,579 feet). According to the director of the ski lift firm, it’s likely the pair fell into a crevasse.

Alongside their bodies were backpacks, a watch, tin bowls, a glass bottle, and male and female shoes still encased in ice. The bodies were found lying next to each other.

After the original disappearance, villagers spent two-and-a-half months searching for the Dumoulin’s, but eventually, their seven children were resettled with other families.

Marcelin and Francine, who were 40 and 37 respectively at the time of their disappearance, are far from the only missing people to be slowly revealed as the ice recedes.

Local police report that bodies hidden for decades are often uncovered,  and they have a list of 280 missing people stretching back to 1925.

Warmer temperatures have caused maximum snow depths in the Swiss Alps to drop by 25 percent since 1970, while the ski season has shrunk by 37 days at the same time – an indication of shifting snow levels.

Experts are crediting climate change for revealing other remains, like the two Japanese climbers discovered in the Swiss Alps in 2015, and the New Zealand climber whose body was found at the foot of the country’s Tasman glacier in the same year.

Back in 2014 the Italian Alps even gave up bodies of soldiers who died in World War I.

A steady trickle of frozen artifacts has been discovered in the same region since the 1990s, including a well-preserved love letter to someone named Maria.

As for the Dumoulin’s, they can now be given a proper funeral, although their daughter Marceline isn’t going to go for the usual black clothing.

“I think that white would be more appropriate. It represents hope, which I never lost,” she says.