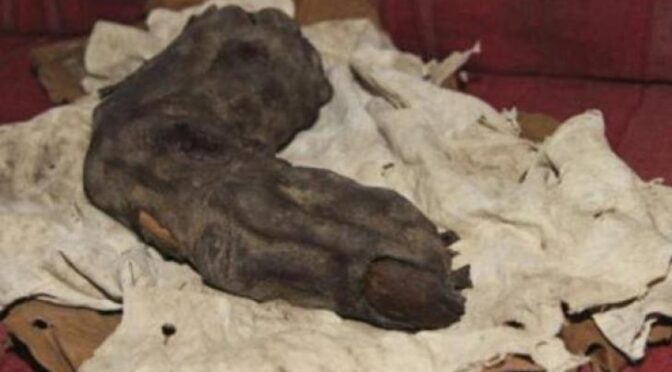 The mummified ‘giant finger’ of Egypt: Did giants once really roam on Earth?

A 15-inch long human finger has been found in Egypt and pictures of it are being released for the very first time.  BILD.de broke this story, and it is spreading like fire all over the Internet.

According to BILD.de, the pictures of this finger were taken by a researcher named Gregor Spörri in Egypt in 1988.  The mummified finger would be considered to be human except for the fact that it is way, way too large to have come from a human hand.

As mentioned earlier, the giant finger is 15 inches long.  It is projected that the person that this finger came from would have been more than 16 feet tall!  You can see more pictures of this amazing find on BILD.de.

As you can tell from the picture above, the fingernail is clearly visible.  This truly is a remarkable specimen.  So is this really a finger of a giant that once lived in Egypt?

Unfortunately, this finger is not housed in a museum in Egypt.  The researcher that took the pictures reportedly had to pay “an old man from a grave robber dynasty” 300 dollars to see it and take pictures of it.

So unfortunately this discovery cannot be independently verified at this time.  Hopefully, all of this publicity will flush this finger back out into the public so that authorities can examine it.

This is potentially an incredibly important part of our history and it would be a shame if these photos are the only evidence we ever get to see of it.

But when it comes to giants, we already know that there is so much other evidence out there.  Recently I wrote about the Nephilim mummy that was found in Peru and about the giant footprints and giant skeletons that have been found all over the world.

But a mummified human finger from a giant in Egypt would be absolutely mind-blowing.  It would be a direct challenge to everything that is commonly accepted about the ancient history of Egypt.

Hopefully, all of this will spur more digs and more research.  The era when the Great Pyramid was constructed in an era that is shrouded in great mystery.

Humanity is only now developing technology that would allow us to construct a similar structure today.  Nobody really knows for sure who built the Great Pyramid or how it was constructed.

There is just so much about ancient Egypt that we simply do not know.  Hopefully, the floodgates will open and much more evidence will emerge soon.