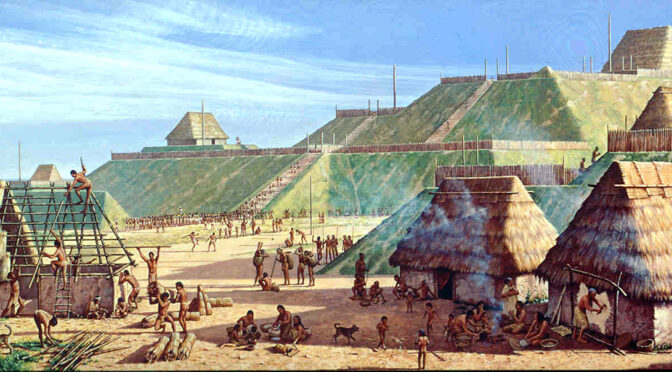 In fact, during its height in the 12th century, Cahokia Mounds was larger in population than London. It spread across six square miles and boasted a population of 10,000 to 20,000 people — vast figures for the time.

But Cahokia’s peak didn’t last long. And its demise remains mysterious to this day.

The region has been occupied for the first time around 1200 BC in the late Archaic period but the first inhabitants in the area are thought to have arrived in the late woodland period around AD 600–700.

It is founded around AD 1050 in what is now western Illinois by archaeological evidence.

Cahokia at its peak was the largest urban center north of Central America’s Mesoamerican civilization with a population of 20,000 inhabitants, although the extent of the population at its highest is still disputed.

The city covered an area between six to nine square miles, notably larger than many contemporary European cities such as London, which during the same period was just 1.12 square miles.

The inhabitants constructed 120 earthen mounds, ranging in size and shape from raised platforms, conical, and ridge-top designs that involved moving 55 million cubic feet of earth over a period several decades.

They constructed ceremonial plazas, situated around the mounds that were interconnected with pathways, courtyards and thousands of dwellings made from wattle and daub, with outlying farming villages that supported the main urban centre.

The largest structure at Cahokia is “Monks Mound” (named after a community of Trappist monks who settled on the mound) which is a 290-metre-tall platform with four terraces that was built around AD 900–955.

The perimeter of the base of Monks Mound measures similar in size to the Great Pyramid of Giza and is notably larger than the base of the Pyramid of the Sun at Teotihuacan.

Surrounding the main precinct was a defensive wooden palisade measuring 2 miles in length with watchtowers, that was built around the year AD 1200.

Although there is no archaeological evidence of conflict, some theories suggest that the defences were built for ritual or societal separation rather than for military purposes.

Cahokia began to decline by the 13th century and was mysteriously abandoned around AD 1300-1350.

Scholars have suggested that environmental factors such as flooding, or deforestation led to an exhaustion of natural resources.