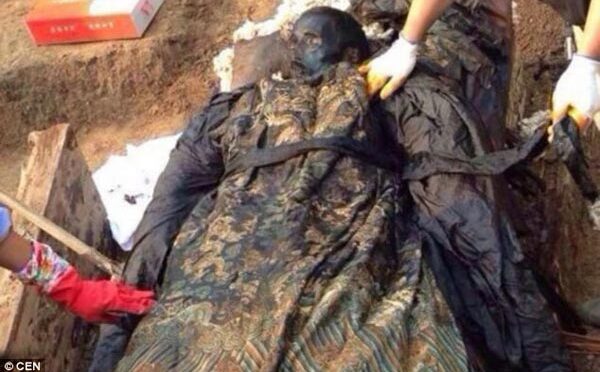 A carefully conserved Chinese mummy, found in a tomb that is 300 years old, was almost instantly destroyed once archaeologists opened the coffin – it turned black within hours of the coffin being opened.

The remains were uncovered on a construction site in a two-meter deep hole in the ground at Xiangcheng in Henan province, central China.

The individual was wearing extremely ornate clothing which indicates that he was a very high-ranking official from the early Qing Dynasty, which lasted from 1644 to 1912.

The Qing Dynasty was the last imperial dynasty of China before the creation of the Republic of China and the present-day boundaries of China are largely based on the territory controlled by the Qing dynasty.

Scientists are perplexed as to how the individual’s remains had stayed so well preserved in the first place, as it was found alongside other tombs in which the remains were mere skeletons.

According to Dr. Lukas Nickel, a specialist in Chinese art and archaeology at SOAS, University of London, the preservation was not intentional but happened as a result of the natural conditions around the coffin, combined with the fact that the coffin was lacquered and covered in charcoal which would have prevented bacteria getting in.

“The Chinese did not do any treatment of the body to preserve it as known from ancient Egypt, for instance,” said Dr. Nickel. “They did, however, try to protect the body by putting it into massive coffins and stable tomb chambers.”

However, Professor Dong disagrees with this theory and believes that the man’s family used some materials to preserve the body.

In early China, the physical structure of the body was important to them and there was a belief that the dead person ‘lived on’ inside their tomb.

Once the tomb was opened, the natural process of decay started. Although the man’s face was almost normal when it was found, within hours the face, as well as the skin on the whole body, turned black and a foul smell emanating from the coffin.

“What is amazing is the way time seems to be catching up on the corpse, aging hundreds of years in a day,” said Historian Dong Hsiung.

Researchers are working quickly to preserve what is left of the quickly decaying mummy. It is hoped that by studying the individual, archaeologists will gain a better understanding of how the body had remained so well preserved for three centuries.