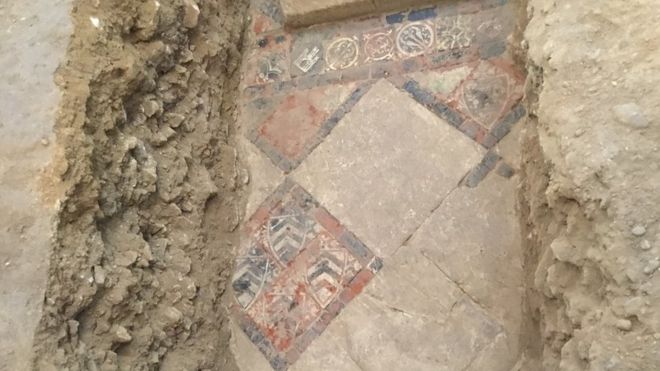 Stunning 13th century tiled floor that has not been seen for 500 years has been uncovered 6.5ft below Bath Abbey – with experts calling it a ‘once-in-a-lifetime’ discovery

A stunning 13th century tiled floor has been found 6.5 feet (two meters) below the current floor level at a medieval Abbey, in what has been described as a ‘once-in-a-lifetime’ discovery.

The vividly-colored tiles, which have not been seen in 500 years, display the coats of arms of powerful Norman monarchs and barons.

They give a unique glimpse at what the interior of the grand Normal cathedral, which once stood on the site, would have looked like.

The ‘amazing’ discovery was made at Bath Abbey in Somerset – which was initially founded in the 10th century – as part of vital repair work to the Abbey’s collapsing floor.

‘We knew there was a floor down there but in a couple of places that we’ve done [and seen] already, there have been nothing of significance at all, just ordinary stone of that.

‘We have been surprised and thrilled by the beautiful medieval tiles that Wessex Archaeology has just found as they dig down through the different layers of history below the floor.’

‘You really have to appreciate the level of detail and professionalism that went into making and placing these tiles. They didn’t have cutting tools, glazing, or other tiling help that we have in modern times. A lot of time and effort went into making this small section of a stunning floor.’

Cai Mason, senior project officer for Wessex Archaeology, which is excavating the site, said that for archaeologists involved it is ‘a once-in-a-lifetime find’.

‘The trench in which the tiled floor was discovered was excavated during vital repair and stabilization work to the abbey’s collapsing floor’, he said.

‘The work is part of the 19.3 million ($25m) Heritage Lottery-supported Footprint Project which will also create new spaces and facilities for the community and install an eco-friendly heating system using Bath’s famous thermal spring.’

The 700-year-old floor is currently being painstakingly recorded by the archaeologists.  It will eventually form part of a 3D model encompassing all the excavations within the abbey. The tiles will be preserved in situ; covered by a protective membrane and a layer of inert sand before the floor layers are built back up again to their present level.

Mr. Curnock said: ‘We have been surprised and thrilled by the beautiful medieval tiles that Wessex Archaeology has just found as they dig down through the different layers of history below the floor.

Experts have always known that before the current Gothic church was built there stood a Norman Cathedral and before that an Anglo-Saxon monastery.

‘Lifting the pews and repairing the floor as part of the Footprint project is a once-in-a-lifetime opportunity’, Mr. Curnock said.

‘It will mean that we can maintain and make improvements to this beautiful building, and change how it can be used to better serve the city, visitors and future generations.

‘However, a massive bonus is that it has allowed us to discover important parts of the heritage; things like these beautiful tiles which are being seen for the first time in centuries.’

Experts say that if it wasn’t for the work carried out for the Footprint project they would have no idea they were here. The floor is composed of exquisite tiles which are attributed to the Wessex School; a series of designs derived from tiles laid at Clarendon Palace, east of Salisbury.

This was composed of powerful Norman marcher barons who held the earldoms of Gloucester and Hertford as well as land in both Wales and Ireland. The family line came to an end when Gilbert de Clare, 8 Earl of Gloucester and cousin of Edward II, died at the Battle of Bannockburn in 1314.