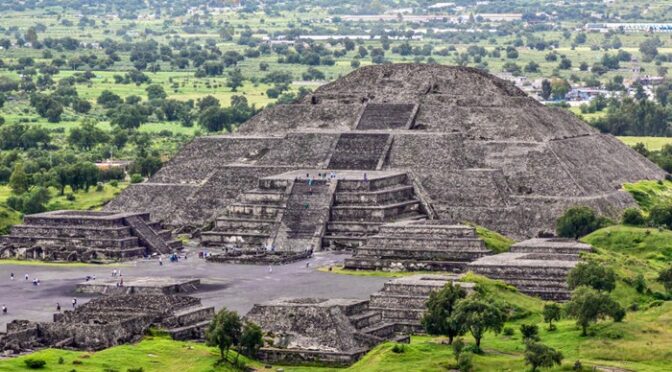 The secret cave lies hidden below the enormous ‘Moon Pyramid’

A secret cave hidden underneath a Mexican pyramid offers clues about the urban design of Teotihuacan, one of the largest and most vibrant cities of ancient times.

Located about 80 kilometers outside of today’s Mexico City, Teotihuacan peaked in AD 300–650, well before the Aztecs. The city boasted three monumental pyramids arranged along the 2.4-kilometer ‘Street of the Dead’.

Two of the pyramids were already known to overlie caves and tunnels, which were excavated by Teotihuacanos to obtain construction materials, and were later repurposed for activities such as astronomical observations, the veneration of death and the enthronement of rulers.

Denisse Argote at the National Institute of Anthropology and History in Mexico City and her colleagues measured the electrical resistance of the ground beneath the third structure, the 43-meter-high Moon Pyramid.

They discovered a partially filled cavern about 15 meters underneath the edifice.

Unlike the other caves, this one seems to have formed naturally. Argote and her colleagues think the first settlers of Teotihuacan might have chosen it to be the focal point from which the rest of the city was planned.

Hard Science Unlocks Secrets of Teotihuacan’s Pyramid of the Moon

Previous archaeological digs at Teotihuacan have revealed a series of man-made tunnels beneath the Pyramids of the Sun and of Quetzalcoatl, the latter of which is also called the Temple of the Feathered-Serpent.

These had mostly been excavated for construction materials in upper structures, and according to a report in Heritage Daily, these tunnels were later “repurposed for astronomical observations and for venerating death in the underworld.”

The team of scientists applied ERT and ANT surveys, which are non-invasive geophysical techniques analyzing the electrical resistance of the ground beneath the structure.

With the placement of the pyramid at the end of the Avenue of the Dead, at the foot of Cerro Gordo, shaped to reflect the contours of these mountains, the researchers theorize that it was “symbolic of a connection between the avenue and the watery underworld, whereas the mountain serves as an anchor to the earth.” They said the impact of this discovery opens a discussion about the original planning of Teotihuacan ’s urban design.

The first human establishment in the area dates back to around 600 BC when farmers began tilling the Teotihuacan Valley, which at that time had a total population of about 6,000 inhabitants.

However, due to the development of successful agricultural technologies, from 100 BC to 750 AD, Teotihuacan morphed into a huge urban and administrative center with cultural influences throughout Mesoamerica.

This period saw the massive reconstruction of monuments; including the decorating of the Temple of the Feathered Serpent which dates back to an earlier period.

Period IV, between 650 and 750 AD, marks the end of Teotihuacan as a major power in Mesoamerica. The remains of the homes of the city’s elites, which line the Avenue of the Dead, bear burn marks which lead archaeologists to hypothesize that the city experienced waves of violent social unrest that brought about the city’s decline.

What the newly discovered cave system essentially does is answer the question “why” the first settlers stopped here and started building precisely where they did, and not say 10 miles east or five miles south.

The cave beneath the pyramid suggests that people revered this natural access to the underworld so much that around it they built one of the most influential and biggest cities of the ancient world.

And the remains of that vast crumbling ancient city, which was aligned with the Sun, moon, and stars, it would seem, is a 1:1 map of the underworld – with the Avenue of the Dead acting as the main channel to the other side.