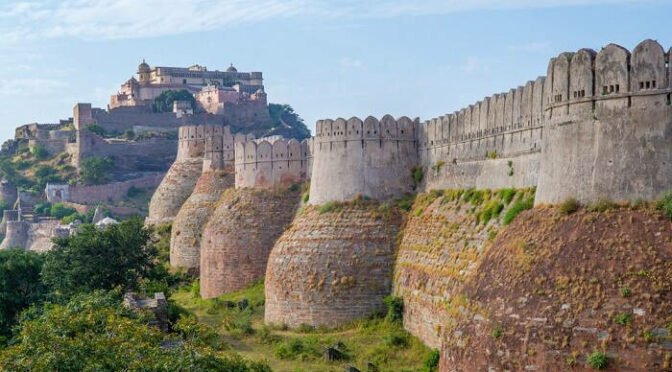 We are all familiar with China’s Great Wall, the biggest wall ever constructed. It is a wall with a multitude of tales, including different historical and mythological assessments. In the past, Chinese inmates have been sent to serve their sentence.

It is likely that fewer individuals have heard about the Kumbhalgarh Fort and its adjacent wall, commonly agreed to be the world’s second-largest wall.

Kumbhalgarh is a place nestled in the western portion of India between 13 towering mountain peaks. More specifically, it can be found in Rajasthan State, approximately 50 miles from Udaipur City.

Found among the mountaintops, the Kumbhalgarh Fort is a 15th-century masterpiece built by Rana Kumbha. The site also counts as the birthplace of one of the greatest Mewar rulers and warriors are known as Maharana Pratap. However, this area was considered to be of high strategic importance long before the Kumbha dynasty came to prominence.

The very first fort to occupy the spot at Kumbhalgarh was there as early as the 6th century. Back then, it was King Samprati of the Maura Age who constructed it.

A majority of historians consider him a peace-loving ruler, and a very courageous king. He had managed to establish several Jain centers across different Arab countries, as well as Iran.

It is not very clear though what happened in the region or with the site of the fort until the beginning of the 14th century. At that point, it was Alauddin Khiljii who occupied the area. He was one of the greatest Muslim rulers by far, running successful campaigns on the Indian subcontinent and acquiring territories that reached the most southern parts of it.

Kumbhalgarh, as it is today, was built and ruled by the Kumbha dynasty, which eventually brought prosperity and progress to the region. Unlike the Great Wall of China, which took more than 1,800 years to complete, the Great Wall of India, as the Kumbhalgarh is often referred to, took just a little less than a century to finish.

The wall extends over roughly 22 miles, while its width varies between 15 and 25 feet, which is still enough to accommodate up to eight horses across it positioned side by side. Moreover, Kumbhalgarh Fort also makes for the second most important fort in the area, coming after the Chittorgarh Fort.

Occupying its spot in the wilderness atop a hill, Kumbhalgarh sits at around 3,280 feet above sea level. The building activities had commenced in 1443 AD and the story goes that at first, it was very difficult for Kumbha to make the wall stand strong and tall.

Legend has it that a couple of attempts were made to build the wall, but nothing really worked out. That is, until the moment a spiritual teacher supposedly came to give advice, saying that someone had to sacrifice their life in order for the wall to be successfully accomplished.

Several versions of the legend exist, and all of them tell of a different character who happened to sacrifice his life for the fort; either it was a pilgrim or a soldier, or the spiritual teacher and the pilgrim were one and the same person.

A person was chosen and beheaded in ritual practice, and the temple was constructed supposedly at the same spot where his head fell.

In remembrance of this significant sacrifice, there is a shrine and a temple named as “Hanuman Pol” today, standing at the main gate of the fortress, which is one of seven gates in total that guard the locality.

The complex incorporates at least 360 temples in its boundaries, including Jain and Hindu ones, as well as a prominent watchtower. The Badal Mahal Palace is certainly one of the most remarkable edifices of all within the complex, standing out with its beautiful green, white, and turquoise colors.

Throughout its long history, Kumbhalgarh parted the kingdoms of Mewar and Marwar for a great period of time, serving as the ultimate refuge of several Mewar rulers.

Over the course of five centuries or more, Kumbhalgarh has been occupied only once, and it took the combined effort of several armies to occupy the locality. The occupation lasted for a mere two days, and apparently, it all happened because all the water resources had allegedly run out back at the fort.

Significant renovation on Kumbhalgarh took its course during the 19th century. At present, the site is opened for visitors to explore, whether that means reaching the most remote parts of the wall, or by just taking a look at the most mesmerizing view that opens from its most accessible point.