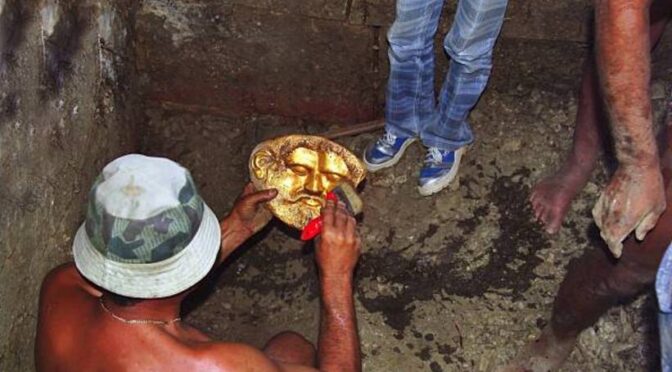 A 2,400-year-old golden mask that once belonged to a Thracian king was unearthed in a timber-lined tomb in southeastern Bulgaria, archaeologists reported.

The mask, discovered over the weekend, was found in the tomb along with a solid gold ring engraved with a Greek inscription and the portrait of a bearded man.

“These finds confirm the assumption that they are part of the lavish burial of a Thracian king,” said Margarita Tacheva, a professor who was on the dig near the village of Topolchane, 180 miles (290 kilometers) east of the capital, Sofia.

“The artifacts belonged to a Thracian ruler from the end of the 4th century B.C. who was buried here,” Kitov added. According to Kitov, the Thracian civilization was at least equal in terms of development to the ancient Greeks.

The Thracians lived in what is now Bulgaria and parts of modern Greece, Romania, Macedonia, and Turkey between 4,000 B.C. and the 8th century A.D. when they were assimilated by the invading Slavs.

In 2004, another 2,400-year-old golden mask was unearthed from a Thracian tomb in the same area.

Dozens of Thracian mounds are spread throughout central Bulgaria, which archaeologists have dubbed “the Bulgarian valley of kings” in reference to the Valley of the Kings near Luxor, Egypt, home to the tombs of Egyptian Pharaohs.

Seuthes III was the ruler of the Odrysian kingdom of Thrace from c. 331 BC to c. 300 BC, After the campaigns of Philip II in 347–342 a significant part of Thrace was dependent on Macedon.

After Philip’s death in 336 BC, many of the Thracian tribes revolted against Philip’s son Alexander the Great, who waged a campaign against and defeated the Getae and King Syrmus of the Triballi. All other Thracians sent troops to join Alexander’s army.

Seuthes revolted against Macedon in about 325 BC, after Alexander’s governor Zopyrion was killed in battle against the Getae.

After Alexander died in 323 BC he again took up arms in opposition to the new governor Lysimachus. They fought each other to a draw and each withdrew from the battle.

Ultimately Seuthes was compelled to acknowledge the authority of Lysimachus, by then one of Alexander’s successor kings.

In 320 BC, Seuthes III moved the Odrysian kingdom to central Thrace and built his capital city at Seuthopolis (Kazanlak, present-day Bulgaria).

In 313 BC he supported Antigonus I in the latter’s war against Lysimachus, occupying the passes of Mount Haemus against his overlord but was again defeated and forced to submit