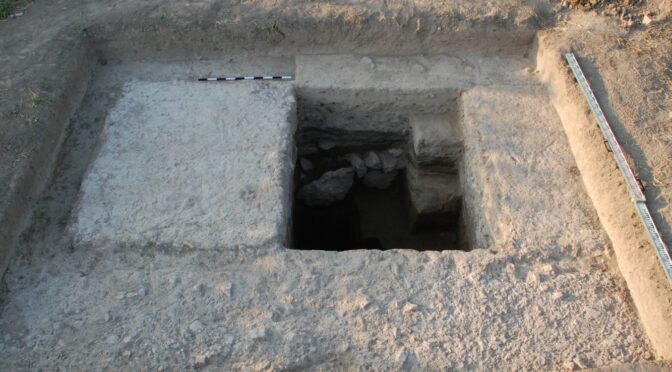 Archaeologists from the University of Münster and the National Academy of Sciences of the Republic of Armenia have discovered remains of a Roman arched aqueduct during excavation work on the Hellenistic royal city of Artashat-Artaxata in ancient Armenia.

It is the easternmost arched aqueduct in the Roman Empire. Excavation work took place back in 2019, and an evaluation of the find has now been published in the “Archäologischer Anzeiger” journal.

“The monumental foundations are evidence of an unfinished aqueduct bridge built by the Roman army between 114 and 117 CE,” explains author Prof. Achim Lichtenberger from the Institute of Classical Archaeology and Christian Archaeology at the University of Münster.

“At that time, Artaxata was destined to become the capital of a Roman province in Armenia.”

“The planned, and partially completed, construction of the aqueduct in Artaxata shows just how much effort was made, in a very short space of time, to integrate the infrastructure of the capital of the province into the Empire,” says co-author Torben Schreiber from the Institute of Classical Archaeology and Christian Archaeology at the University of Münster.

“The aqueduct remained unfinished because after Trajan’s death, in 117 CE, his successor Hadrian relinquished the province of Armenia before the aqueduct was completed.”

The archaeologists, therefore, see their find as furnishing evidence for the failure of Roman imperialism in Armenia.

In their excavation campaign, the team used a multidisciplinary combination of methods from the fields of archaeology, geophysics, geochemistry and archaeoinformatics.

The area of the Hellenistic metropolis of Artaxata in the Ararat Plain was first examined geomagnetically. At this stage of their work, the experts surveyed and charted any anomalies.

The geomagnetic image showed a conspicuous dotted line, which they analysed with so-called sondages. The results were documented by the archaeologists three-dimensionally.

Additional drillings provided evidence of further unfinished or destroyed pillars of the aqueduct.

“We used satellite pictures and infrared images from a drone to visualise the course of the aqueduct’s pillars,” says co-author Dr Mkrtich Zardaryan from the Institute of Archaeology and Ethnography at the National Academy of Sciences of the Republic of Armenia.

“We reconstructed the planned course of the aqueduct by means of a computer-assisted path analysis between the possible sources of the water and its destination.”

A scientific analysis of the lime mortar used showed that it was a typical Roman recipe.

An analysis of soil samples dated the construction of the aqueduct to between 60 and 460 CE, and in the opinion of the researchers, this makes the reign of Emperor Trajan the most likely dating for it.

Project: “Artaxata in Armenia – Fieldwork in a Hellenistic Metropolis in the Ararat Plain”

Since 2018 a team of German and Armenian scientists – headed by Achim Lichtenberger (Münster University), Mkrtich Zardaryan (Armenian Academy of Sciences) and Torben Schreiber (Münster University) – have been carrying out research into the Hellenistic metropolis of Artaxata in the Ararat Plain in Armenia. Their aim is to examine both a newly established Hellenistic royal city and the many-faceted cultural imprint between Central Asia, Iran and the Mediterranean region.

The excavation project is being funded by the National Academy of Sciences of the Republic of Armenia and by the German Research Foundation (DFG).