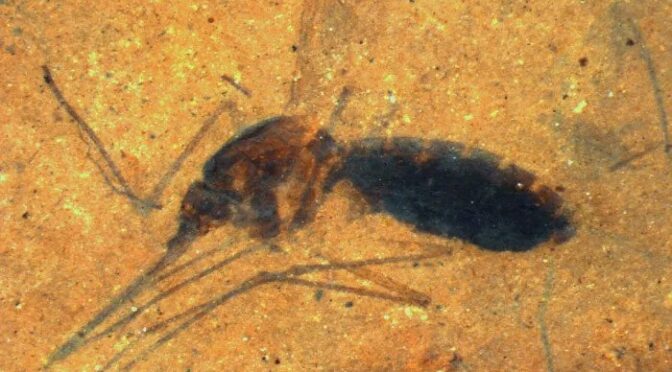 Trapped In A Fossil: Remnants Of A 46-Million-Year-Old Meal

A mosquito plunged its proboscis into an animal, perhaps a bird or a mammal, and filled up on a blood meal around 46 million years ago. Then its luck turned for the worse, as it fell into a lake and sunk to the bottom.

Normally this wouldn’t be newsworthy, and nobody would likely know or care about a long-dead insect in what is now northwest Montana.

But somehow, the mosquito didn’t immediately decompose — a fortuitous turn of events for modern-day scientists — and became fossilized over the course of many years, said Dale Greenwalt, a researcher at the National Museum of Natural History in Washington, D.C. Greenwalt discovered the mosquito fossil after it was given to the museum as a gift, and he immediately realized the specimen’s rarity.

It is, in fact, the only blood-engorged mosquito fossil found, Greenwalt told LiveScience.

The fossil is even stranger because it comes from shale, a type of rock formed from sediments deposited at the bottom of bodies of water, as opposed to amber, the age-old remains of dried tree sap, in which insect remnants are generally better preserved.

“The chances that such an insect would be preserved in shale is almost infinitesimally small,” Greenwalt said.

In their study, Greenwalt and his collaborators bombarded the mosquito fossil with molecules of bismuth, a heavy metal, which vaporizes chemicals found in the fossil.

These airborne chemicals are then analyzed by a mass spectrometer, a machine that can identify chemicals based on their atomic weights, Greenwalt said.

The beauty of this technique, called time-of-flight secondary ion mass spectrometry, is that it doesn’t destroy the sample — previously, similar techniques required grinding up portions of fossils, he added.

The analysis revealed hidden porphyrins, organic compounds found in hemoglobin, the oxygen-carrying protein in the blood, hidden in the fossilized mosquito’s abdomen.

The finding may bring to mind the story of “Jurassic Park,” a novel and movie in which scientists resurrect dinosaurs from DNA preserved in blood-engorged mosquitoes preserved in amber.

Although this finding doesn’t really make this fictitious story any more likely, it does show that complex organic molecules besides DNA can be preserved for a long time, Greenwalt said.

The discovery also shows that “blood-filled mosquitoes were already feeding at that time, suggesting that they were around much earlier and could have fed on dinosaurs,” said George Poinar, a paleo-entomologist at Oregon State University, who wasn’t involved in the research.

Greenwalt said he had no way of knowing exactly how the mosquito was preserved so well. Perhaps the most likely hypothesis is that the insect was trapped in a covering of water-suspended algae, which are capable of coating specimens in a sticky, gluelike material, before sinking to the bottom; this algae process has been shown to fossilize other types of insects, he said.

Researchers don’t know what kind of animal the blood came from since hemoglobin-derived porphyrins amongst different animals appear to be identical, Greenwalt said.

The study is exciting because it provides more evidence that porphyrins, organic compounds found in “virtually all living organisms from microbes to humans in varying amounts” are “extremely stable” — and are thus a perfect target for studying long-dead plants and animals, said Mary Schweitzer, a researcher at the North Carolina Museum of Natural Sciences, who wasn’t involved in the study.