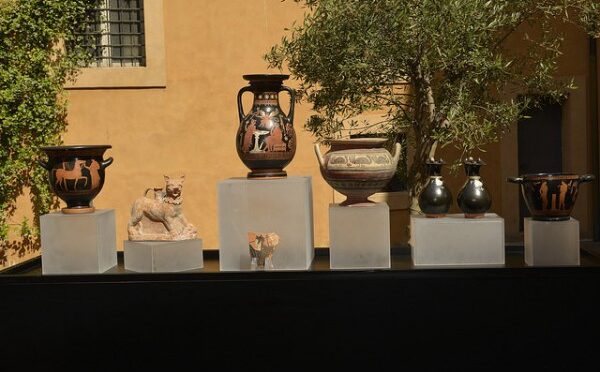 Italy’s culture minister on Thursday welcomed the return of 201 prized antiquities valued at over 10 million euros ($11 million) that had been located in prestigious U.S. museums and galleries after being illegally trafficked in recent decades.

They were among thousands of antiquities seized from traffickers or returned to Italy this year in major operations that also targeted trafficking rings in Belgium, the Netherlands, Switzerland and Germany.

Of the 201 works returned by U.S. officials earlier this month, 161 have been repatriated to Italy while 40 are on exhibit at the Italian Consulate General in New York through March 2022.

“These artworks will not end up, as has happened many times in the past, all in one big museum,” Culture Minister Dario Franceschini told a press conference. Instead, they will be returned to the places where they were stolen for display in museums there.

“This too is a great homecoming operation that will add value to our extraordinary country as a vast museum.

They are artworks of absolute importance that will attract people to those places and territories,” Franceschini said.

The U.S. haul includes 96 pieces that had been in the collection of the Fordham Museum of Greek, Etruscan and Roman Art, including ancient pottery and amphora; a terracotta statue titled dating from the 4th century BC seized from a New York gallery; and six items returned from the Getty Museum, including a large ceramic Etruscan vessel.

Most of the stolen cache was traced to the activities of Edoardo Almagia, an Italian native who was living in New York.

Charges against him in Italy in 2006 were thrown out due to the statute of limitations, but a judge in Rome in 2013 ordered the seizure of all his antiquities in both New York and Naples.

He remains at large in Italy, according to the Manhattan district attorney’s office.

One major operation secured nearly 800 objects from ancient Daunia, which was located in the Gargano peninsula in northern Puglia, while another broke up a trafficking ring of artefacts from southern Italian civilizations operating in northern Europe.

Thirteen people are under investigation in that case, which led to the recovery of 2,000 artefacts.