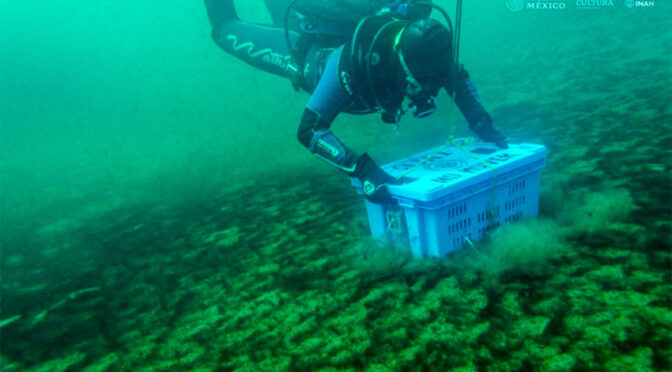 Underwater Artifacts Returned to Mexico’s Lake of the Moon

A collection of objects preserved in a special container at the bottom of Lake of The Moon at high altitudes in the Nevado de Toluca Volcano in Central Mexico was deposited by Mexico’s National Institute for Anthropology and History (INAH).

The artifacts were found in the lake in 2007 and kept in the last 13 years during the research under similar underwater environments.

52 pre-Hispanic ritual items returned to their site by underwater archaeologists where they were found, the bed of one of the two crater lakes of the Nevado de Toluca volcano.

Members of the underwater archaeology team at the National Institute of Anthropology and History (INAH) deposited the mostly spherical and conical resin objects on the bed of the Lake of the Moon earlier this month.

The objects, believed to have been made by the Matlatzinca people between the 13th and 15th centuries and placed in the lake by pre-Hispanic priests, are stored in a specially-made container that allows water and sediment to flow over them. As a result, they are protected from deterioration.

The trove of objects is the first in situ underwater archaeological archive in Mexico, according to an INAH statement.

The decision to preserve the objects in their place of origin complies with recommendations in the 2001 UNESCO Convention on the Protection of the Underwater Cultural Heritage.

The objects were found at the Nevado de Toluca crater lake in 2007 and have been studied and analyzed for the past 13 years.

Enna Llabrés Torres, a researcher with the INAH underwater archaeology department who made the container in which the resin relics are stored, said that the objects could be removed for further study in the future as new technologies and methods of analysis emerge.

She explained that while the objects were studied over the past 13 years, they were stored underwater in conditions similar to those found at the Lake of the Moon, which is located more than 4,000 meters above sea level and has an average temperature of 3 C.

The conical objects measure 20-30 centimeters while the spherical ones are roughly the size of a baseball. INAH archaeologist Iris Hernández said that the Nevado de Toluca volcano has been considered a sacred site since pre-Hispanic times and for that reason, relics used in rituals and ceremonies have been found there.

She said that the conical objects – made out of resin of the copal tree – may have been specifically made to resemble the form of the volcano, located in modern-day México state.

According to carbon dating tests conducted by experts at the National Autonomous University Institute of Physics, the ritual objects date back to between 1216 and 1445 AD.

The time period corresponds to the rule of the Matlatzinca people in the Valley of Toluca prior to their domination by the Mexicas.