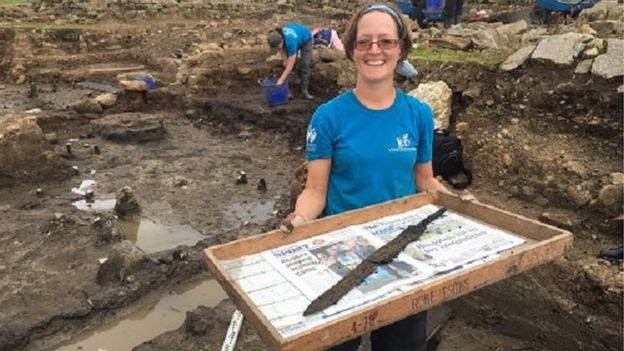 Swords, arrowheads and ballista bolts amongst a cache of artifacts discovered during cavalry barrack excavations at Roman Vindolanda. Archaeologists at the Roman fort of Vindolanda have made one remarkable discovery after another in what has been an exceptional year for the research excavations.

Test pit excavations, below the stone foundations of the last stone fortress, revealed a layer of black, sweet-smelling and perfectly preserved anaerobic, oxygen-free, soils in an area where they were completely unexpected.

Hidden in this soil were the timber walls and floors, fences, pottery and animal bones, from the abandonment of a Roman cavalry barrack. The excavated rooms included stables for horses, living accommodation, ovens and fireplaces.

While excavating the material from the corner of one of the living rooms a volunteer excavator made an outstanding discovery.

The earth surrounding the object was slowly pulled back under careful supervision to reveal the tip of a thin and sharp iron blade, resting in its wooden scabbard.

As the archaeologists excavated further the shape of a hilt and handle slowly emerged from the black soil and it became immediately clear that the Romans had left behind a complete sword with a bent tip. It was the ancient equivalent of a modern soldier abandoning a malfunctioning rifle.

Dr Andrew Birley recalled the moment as “quite emotional” and went on to say, “you can work as an archaeologist your entire life on Roman military sites and, even at Vindolanda, we never expect or imagine to see such a rare and special object as this.

It felt like the team had won a form of an archaeological lottery.” Rupert Bainbridge, the volunteer who made the initial discovery described the moment as overwhelming, commenting, “I was so excited to excavate such an extraordinary artefact, especially something that resonated so much with the fort setting that we were digging in.”

A few weeks later, Vindolanda archaeologists accompanied by a new team of volunteers were finishing working on a room adjacent to the one in which the sword was discovered.

Here they remarkably discovered a second sword, this time without a wooden handle, pommel or scabbard, but with the blade and tang still complete and sitting on the floor exactly where it had been left thousands of years before.

Dr. Birley commented, “You don’t expect to have this kind of experience twice in one month so this was both a delightful moment and a historical puzzle. You can imagine the circumstances where you could conceive leaving one sword behind rare as it is…. but two?” Both blades came from separate rooms, and are likely to have belonged to different people. One theory is that the garrison was forced to leave in a hurry, and in their haste, they left not only the swords but also a great number of other perfectly serviceable items that would have had great value in their time.

The swords are truly remarkable, but they form only part of an outstanding collection of artefacts left behind in those cavalry barrack buildings. In another room were two small wooden toy swords, almost exactly the same as those that can be purchased by tourists visiting the Roman Wall today.

Roman ink writing tablets on wood, bath clogs, leather shoes (from men, women, and children), stylus pens, knives, combs, hairpins, brooches and a wide assortment of other weapons including cavalry lances, arrowheads, and ballista bolts were all abandoned on the barrack room floors.

Quite spectacular are the copper-alloy cavalry and horse fitments for saddles, junction straps and harnesses which were also left behind. These remain in such fine condition that they still shine like gold and are almost completely free from corrosion.

The swords and other objects form a remarkable discovery of one of the most comprehensive and important collections of this type of material from a Hadrian’s Wall site.

Visitors to Vindolanda will be able to see this cache of cavalry finds displayed in the site museum this autumn, just as a major Hadrian’s Cavalry exhibition along the line of Hadrian’s Wall comes to a close another has arrived!

The Garrison at Vindolanda at this time (cAD120) was made up of a combination of peoples including the 1st Cohort of Tungrians who heralded from modern day Belgium.

They were joined by a detachment of Vardulli Cavalrymen from northern Spain. It is likely that the base held more than 1000 soldiers and probably many thousands more dependants including slaves and freedmen, representing one of the most multicultural and dynamic communities on the Frontier of the Roman Empire at the time.

The new finds give an intimate insight into the lives of people living on the edge of the Roman Empire at a time of rebellion and war before the construction of Hadrian’s Wall in AD122.