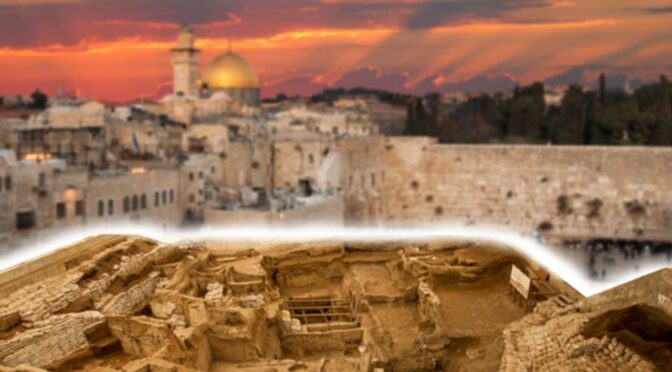 A huge prehistoric settlement dating back 9,000 years unearthed near Jerusalem by Israeli archaeologists during preparations for a new highway could rewrite the history of humans in the region.

Home to around 3,000 individuals during the Stone Age the settlement, near modern-day Motza, disproves the long-standing theory that humans did not live in Judea at this time and is being called the area’s ‘big bang’ as well as being a ‘game-changer’ for our knowledge of humankind’s settlement of the country.

The site has revealed large buildings, flint tools, including thousands of arrowheads, axes for chopping down trees, sickle blades, and knives – proving the city was a bustling hub of a complex society.

It was thought that the area was previously uninhabited and only the other bank of the Jordan river had such vast cities but the site, which covers dozens of acres, has forced them to reconsider all they know about Israeli history.

According to the Antiquities Authority, this is the first time that such a large-scale settlement from the Neolithic Period is discovered in Israel, and one of the largest of its kind in the region

Before the discovery, it was widely believed the entire area had been uninhabited in that period, during which people were shifting away from hunting for survival to a more sedentary lifestyle that included farming.

Jacob Vardi, co-director of the excavations at Motza on behalf of the Antiquities Authority, said: ‘It’s a game-changer, a site that will drastically shift what we know about the Neolithic era.’

‘So far, it was believed that the Judea area was empty and that sites of that size existed only on the other bank of the Jordan river, or in the Northern Levant.

‘Instead of an uninhabited area from that period, we have found a complex site, where varied economic means of subsistence existed, and all these only several dozens of centimeters below the surface.’

The archaeological team discovered large buildings, including rooms that were used for living, as well as public facilities and places of ritual.  Between the buildings, alleys were exposed, bearing evidence of the settlement’s advanced level of planning.

The team also found storage sheds that contained large quantities of legumes, particularly lentils, whose seeds were remarkably preserved throughout the millennia.

‘This is most probably the largest excavation of this time period in the Middle East, which will allow the research to advance leaps and bounds ahead of where we are today, just by the amount of material that we are able to save and preserve from this site,’ Lauren Davis, an archaeologist with Israel’s antiquities authority, told Reuters.

‘This finding is evidence of the intensive practice of agriculture,’ according to the statement.

‘Animal bones found on the site show that the settlement’s residents became increasingly specialized in sheep-keeping, while the use of hunting for survival gradually decreased.’

Archaeologists also found evidence of some graves and tombs from a more recent era, dating back 4,000 years.  Two warriors were buried in a tomb with a dagger and a spearhead alongside a donkey which is believed would have been domesticated and intended to serve the warriors in the afterlife.

Ms. Davis said: ‘There’s also an amazing find, which is a whole donkey, domesticated, that was buried in front of the tomb probably when they sealed it.’

Buildings and other architectural remains are being studied using non-invasive scanning techniques which are intended to paint a picture of the settlement when it was in use.

Much of the physical remnants will be preserved despite the ongoing roadworks for the Route 16 Project, which includes building a new road to Jerusalem from the Route 1 highway at the Motza Interchange to the capital.