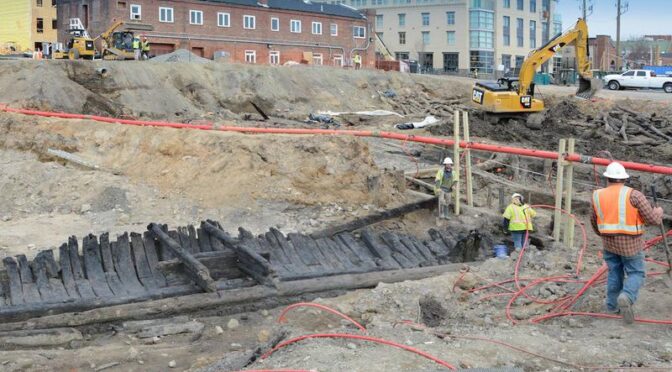 Back in December 2015, a 300-year-old ship buried in Old Town Alexandria was first detected at a construction site for a new hotel.

Local archaeologists suspected that it may have originally been used to truck heavy cargo or was built for military purposes, the Washington Post’s Patricia Sullivan reported at the time.

Later research revealed that the ship had been built in Massachusetts sometime after 1741 and made its way to Virginia in the latter half of the century, where it was used as a landfill to create new real estate of the 17th-century shoreline.

All three ships are believed to have been built in the mid-to-late 1700s and buried before 1798. A similar ship was discovered nearby at the Hotel Indigo site in late 2015.

“The combination of Revolutionary War-era ships, early building foundations, and thousands of other artifacts makes Robinson Landing one of the most archaeologically significant sites in Virginia,” said Eleanor Breen, acting City Archaeologist.

“The discoveries at this site have gained international attention, and the City is working with EYA to identify and preserve these important pieces of Alexandria’s history.”

Archaeologists were on hand to provide information and answer questions. The active construction site was not open to the public during the viewing, but many notable elements of the site were visible, including the most recent — and largest — ship discovery. The ships were covered before and after the viewing, in order to protect the wood from exposure.

“Working in Alexandria for more than 20 years, we recognize and respect the rich history of the city and the importance of preserving discoveries of this kind,” said Evan Goldman, EYA LLC Vice President of Acquisition and Development.

“We’re committed to this unprecedented effort to protect the archaeological history of Old Town.  The results have gone well beyond what we expected, and we are thrilled by the significance of the findings and their unique ability to preserve the legacy of the city for years to come.”

The Alexandria Archaeological Protection Code requires developers to have archaeologists on-site to monitor all phases of ground disturbance.

This ensures that any historic features encountered during demolition and construction are dealt with properly so that Alexandria’s history is enriched through archaeological study.

As the development of the Alexandria waterfront continues, excavations have the potential to continue to unearth additional evidence of early wharves and piers, maritime vessels, early industries, and commercial and domestic activities.