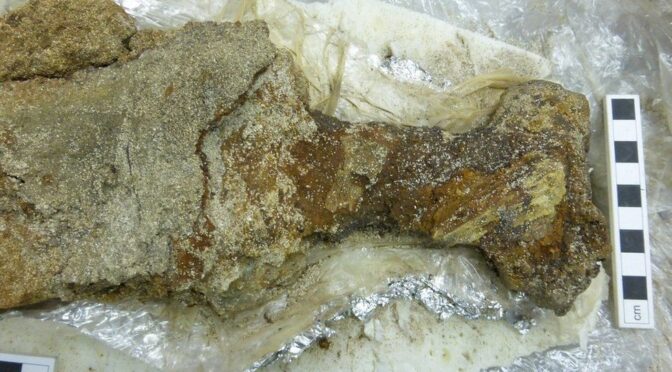 Viking sword discovered on Papa Westray, Orkney has ‘many stories to tell’

A Viking sword found at a burial site in Orkney is a rare, exciting and complex artefact, say archaeologists. The find, made in 2015 on the northeast coast of Papa Westray, is being carefully examined as part of post-excavation work.

Archaeologists have now identified it as a type of heavy sword associated with the 9th Century. The relic is heavily corroded, but x-rays have revealed the sword’s guards to be highly decorated.

Contrasting metals are thought to have been used to create a honeycomb-like pattern.

Archaeologists examining the weapon said it had “many stories to tell”.

The remains of a scabbard, a sheath for the blade, was also found.

AOC Archaeology’s Andrew Morrison, Caroline Paterson and Dr Stephen Harrison suggested there was more information still to be gleaned from the finds.

In a statement, the team said: “To preserve as much evidence as possible, we lifted the whole sword and its surrounding soil in a block to be transported to the lab and forensically excavated there.

“It’s so fragile we don’t even know what the underside looks like yet, so our understanding is sure to change in the coming months.

“The iron in the sword has heavily corroded, with many of the striking details only visible through x-ray.”

The excavations at Mayback revealed a number of finds, including evidence of a rare Viking boat burial, and a second grave with weapons, including the sword.

Archaeologists said the graves maybe those of first-generation Norwegian settlers on Orkney.

AOC Archaeology has been working with Historic Environment Scotland on the research.