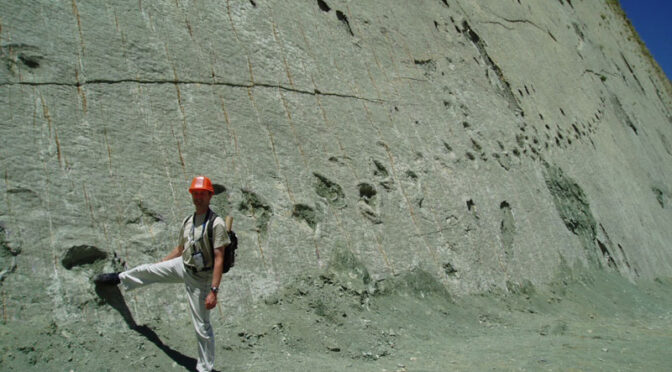 Cal Orko, an immense limestone slab 1.5 km (0.9 miles) long and over 100 meters high (328 ft), is situated 5 km (3 miles from downtown Sucre, Bolivia. Visitors will look through time on this steep face (72 degrees inclination) to when dinosaurs roamed the Earth more than 68 million years ago.

You will find 462 different dinosaur tracks from at least 8 different species at Cal Orko, totaling an astounding 5,055 individual dinosaur footprints. So how do thousands of dinosaur footprints come to be, on a seemingly vertical rock face hundreds of feet high? You’ll have to scroll down to find out.

Cal Orko: A Paleontologist’s Dream… Inside a Quarry

Believe it or not, Cal Orko is situated entirely within a limestone quarry owned by FANCESA, Bolivia’s National Cement Factory.

Located in the ‘El Molino’ formation, the sight of heavy mining machinery (one could argue they are today’s ‘land giants’) set against a backdrop of 68 million-year-old dinosaur footprints (Earth’s prehistoric ‘land giants’) creates an intriguing parallel.

Further up the hill is Parque Cretácico. Opened in 2006, the dinosaur museum features 24 life-sized dinosaur replicas, various exhibitions, and a viewing platform 150 meters (~500 ft) from the rock face. It’s from this vantage point that you truly grasp the sheer scale and magnitude of Cal Orko.

So Dinosaurs Can Climb Walls Now?

Not quite. We’re looking at something 68 million years in the making. The footprints at this site were formed during the Maastrichtian age of the Cretaceous Period in the Mesozoic Era. As Ian Belcher of The Guardian explains:

“It was unique climate fluctuations that made the region a palaeontological honey pot. The creatures’ feet sank into the soft shoreline in warm damp weather, leaving marks that were solidified by later periods of drought. Wet weather then returned, sealing the prints below mud and sediment.

The cherry on the cake was added when tectonic activity pushed the flat ground up to a brilliant viewing angle – as if nature was aware of its tourism potential.”

Cal Orko is one of the few locations in the world where you will find a concentration of footprints from a wide variety of dinosaurs that lived at the end of the Cretaceous period. The sheer size, geological significance, biodiversity, and social behavior that can be studied here makes Cal Orko a special place.

Take the trail of Johnny Walker for example. Johnny Walker was the name given to a baby Tyrannosaurus rex whose 367 meters (~1200 ft) path can be traced and observed here.