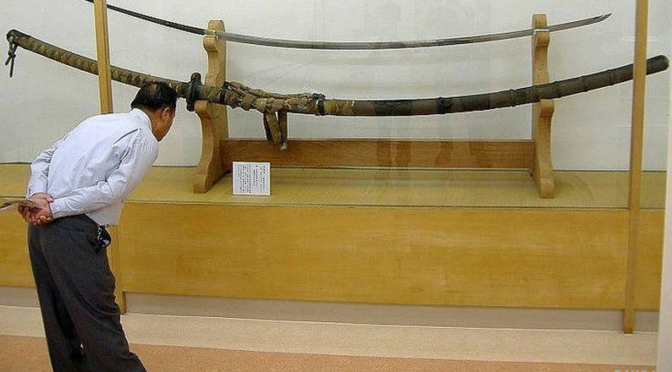 Was this Massive Sword from the 15th Century used by a Giant Samurai?

The Norimitsu Odachi is displayed in its full glory at the Kibitsu Shrine in the Okayama Prefecture. The giant sword has captivated Japan and its foreign visitors with its size and grandeur.

The Norimitsu is so large, legends have stated that the weapon was once forged and wielded by a giant warrior. Other than its measurements, 12.37 feet in length and 31.97 lbs in weight, the exact origins of the Norimitsu Odachi continues to be shrouded in mystery.

A Look into the Mysterious Norimitsu Odachi

Samurais have been a part of Japanese culture since the start of the tenth century. They were fierce warriors who swore oaths to protect their respective clans. One of the things they were most renowned for was their primary weapon of choice: the sword.

There are a wide variety of blades produced by the skilled swordsmiths of Japan. The katana is without a doubt the most popular one due to its connection to the samurai.

A lesser-known traditional Japanese sword is the odachi, which literally translates to “large/great sword.” In order to be classified as an odachi, the weapon must have a blade length of 3 shaku (35.79 inches or 90.91 cm), though there have been some records of blades reaching around 6.56 feet in length.

What was the purpose of the odachi?

The odachi functioned either as ceremonial objects or infantry swords. As an offering to a shrine’s patron gods. Some odachi was actually used as an offering to the gods to protect warriors in battle. Others were displayed in temples as mythological symbols.

As a ceremonial object.  Production of the odachi was at an all-time high during the Edo period where it was used in various ceremonies. Researchers have also stated that the odachi had a more “ritualistic” role when it came to war, similar to that of flags during a battle.

The odachi was also said to be a weapon of choice during the fourteenth century, specifically the Nanboku-chō period. This claim is backed up by literary works such as the Heike Monogatari and the Taiheiki.

As a weapon for war, the odachi’s large size proved to be a problem. It was believed that samurai would carry it on their back or by hand.

During the Muromachi era, samurais would have their assistants carry the massive sword to help draw it during battle. Foot soldiers were more likely to carry the sword slung across their backs as opposed to katanas, which were typically carried on the side.

Fumon Tanaka, a traditional Japanese martial arts practitioner, uses a special drawing technique for a “shorter” odachi. It involves pulling out the sheath rather than drawing the actual blade. Swordsmanship schools around the country have adopted this method, as well as the Shin musō Hayashizaki-ryū and Iaidō.

Forging the odachi proved to be no easy feat. Their length made heat treatment more complicated due to its expense and technique. Polishing was quite the challenge too.

Because of their size, the odachi needed to be hung from the ceiling or carefully placed in a stationary position to be polished as opposed to normal swords that are merely moved over polishing stones.

The odachi’s reverence dwindled down after the 1615 Siege of Osaka (Osaka Natsu no Jin), in which the Tokugawa Shogunate annihilated the Toyotomi clan. The loss was said to be due to the Shogunal government prohibiting swords above a set length. Odachi swordsmiths were forced to cut down the length to meet the standards.

So what is the truth behind the Norimitsu Odachi?

Everyone agrees that if the sword truly had an owner who took it out to battle, they would have been a giant of unproportionate measures.

However, if one were to disregard mythology and folklore, it looks like the Norimitsu odachi was nothing more than a ceremonial sword created by a skillful craftsman. Whoever was behind the forging of this beautiful weapon certainly wanted to showcase their skills—or wealth, for that matter.