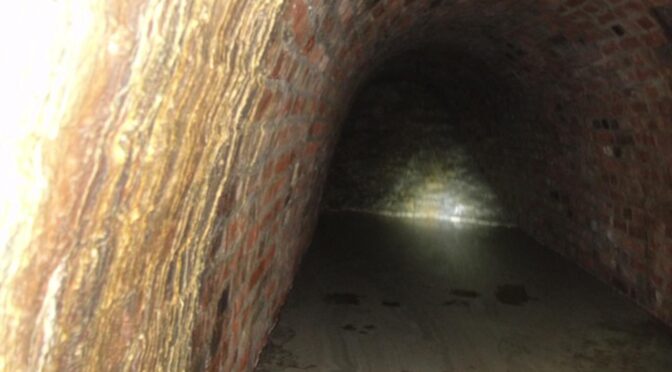 Medieval tunnel discovered under the castle in Szczecin in Poland

Archaeologists have uncovered over 270 meters of previously hidden tunnels beneath the Pomeranian Dukes’ Castle in Szczecin. They also warned that more detailed research was needed because they could collapse. Some of them come from the Middle Ages.

The management of the Pomeranian Dukes’ Castle informed about the discovery of tunnels that had not been known so far.

We have heard legends about the labyrinth of corridors under the castle, but there has never been evidence that they actually exist – informs Monika Adamowska, press spokeswoman for the Pomeranian Dukes’ Castle in Szczecin.

However, first, there was a construction disaster – one of the pillars collapsed in May 2017 and with it part of the vault of the northern wing of the Castle. The prosecution decided that soil erosion was probably to blame and the investigation was discontinued.

There was supposed to be a renovation, it was a disaster

The management of the castle, which for years has been wanting to renovate the northern terraces, on the occasion of this investment and taking into account the disaster, commissioned a series of construction and soil tests.

During this research, specialists from the Building Research Institute in Warsaw discovered a labyrinth of tunnels about 16 meters underground.

Under the escarpment and the northern wing, there is a branched network of corridors over 270 meters long – tells us, Adamowska. However, unfortunately, ITB employees also determined that the tunnels are not in good condition.

– This is a very serious situation. The tunnels are covered with rubble, which was used to strengthen the escarpment and created empty spaces, caverns, and rubble above them – continues Adamowska. Additionally, there is groundwater in this place.

This requires swift actions to reinforce the escarpment and a careful examination of the corridors and sheds new light on the recent disaster to which the underground structures may have contributed.

They did not expect tunnels from the Middle Ages

There are entrances to the tunnels probably from the north, which you have to dig. Unfortunately, specialists do not want to do it yet, because then the trees that grow on the part of the slope on which the castle stands could collapse on them.

On February 8, the municipal conservator of monuments gave permission to cut down the trees.

For now, cavers descended into the tunnels through a drilled vertical shaft. They took samples for testing and made photographic documentation. Then it turned out that the post-German corridors from World War II are connected with brick tunnels from the Middle Ages. This was a surprise for the scientists and management.

The findings were confirmed by tests of mortar and bricks samples carried out both in the castle’s Art Conservation Studio and in the Laboratory and Conservation Research Studio in Kraków.

The management of the castle emphasizes that it acts in accordance with the guidelines of specialists and is taking appropriate steps to secure the monument and at the same time investigate the new discovery. He also admits that it will extend the modernization of the terraces.

The Pomeranian Dukes’ Castle is one of the most important monuments in the region – the historic seat of the Griffin family, rulers of the Pomeranian Duchy. The first Slavic stronghold was built on the castle hill in the 12th century, but the modern building was built from the mid-14th century.

– The castle has revealed another secret to us, which may give us more information about the Griffin dynasty. I do not rule out that it may become an attraction for visitors in the distant future – comments Barbara Igielska, director of the Pomeranian Dukes’ Castle in Szczecin, on the discovery.