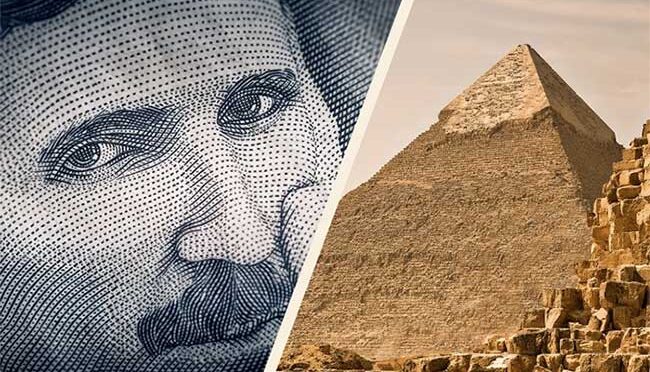 Why is Nikola Tesla obsessed with Egyptian pyramids?

Nikola Tesla died somewhat unappreciated but his fame and the myth around him has continued to grow tremendously into our times. He is now perceived as the ultimate mad scientist, the one who essentially invented our times, credited with key ideas leading to smartphones, wi-fi, AC electrical supply system, and more.

Besides ideas that Tesla implemented and patented, he also had many other interests in different fields of research, some quite esoteric.

One of the most unusual was his preoccupation with Egyptian pyramids, one of humanity’s most mysterious and magnificent constructions.

Tesla believed they served a higher purpose and was investigating them throughout his life. What did he find so alluring about the pyramids? He wondered if they weren’t giant transmitters of energy – a thought that coincided with his investigation into how to send energy wirelessly.

In 1905, Tesla filed a patent in the U.S. titled “The art of transmitting electrical energy through the natural medium,” outlining designs for a series of generators around the world that would tap the ionosphere for energy collections.

He saw planet Earth itself, with its two poles, as a giant electrical generator of limitless energy. His triangle-shaped design became known as Tesla’s electromagnetic pyramid.

“The day science begins to study non-physical phenomena, it will make more progress in one decade than in all the previous centuries of its existence,” said Tesla.

It wasn’t just the shape of the Egyptian pyramids but their location that created their power, according to Tesla. He built a tower facility known as the Tesla Experimental Station in Colorado Springs and Wardenclyffe Tower or Tesla Tower on the East Coast that sought to take advantage of the Earth’s energy field.

The locations were chosen according to the laws of where the Pyramids of Giza were built, related to the relationship between the elliptical orbit of the planet and the equator. The design was intended for wireless transmission of energy.

Were the Great Pyramids essentially ancient Tesla Towers? How the Pyramids were made:

Another aspect of Tesla’s thinking is reportedly related to numerology.

Tesla was, by many accounts, an unusual individual, with obsessive qualities. One such obsession was the numbers “3,6,9”, which he believed were the key to the universe.

He would drive around buildings 3 times before going in or staying in hotels with numbers divisible by 3.

He made other choices in sets of 3. Some belief Tesla’s obsession with these numbers connected to his preference for pyramidal shapes and the belief that there was some fundamental mathematical law and ratios that are part of a universal math language.

As we don’t know precisely how the pyramids were built and why they are looked at by some as creations that may be either generating energy or be serving as deliberately installed messengers or even code from an ancient civilization.

It’s easy to get into “ancient aliens” type of theories by extending such thinking. If you’re up for such an approach, check out this video: