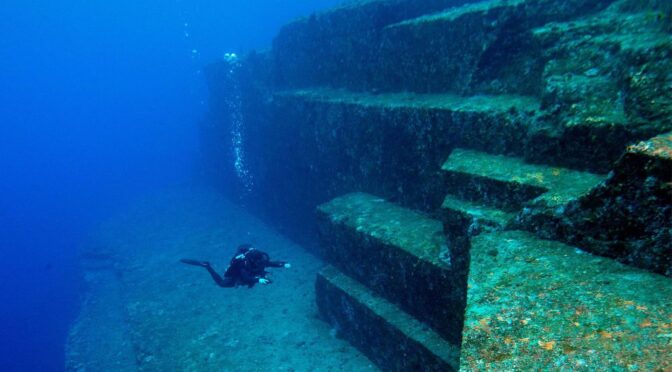 THE YONAGUNI-JIMA KAITEI CHIKEI, LITERALLY translated as “Yonaguni Island Submarine Topography,” is an underwater mystery off the coast of the Ryukyu Islands, Japan.

The massive underwater rock formation is speculated to have existed for more than 10,000 years, but whether the formation is completely man-made, entirely natural, or has been altered by human hands is still up for debate.

The monument was first discovered in 1986 by a diver searching for a good spot to observe hammerhead sharks. After its discovery, Masaaki Kimura, a marine geologist at the University of the Ryukyu, explored the monument for nearly two decades.

Kimura remains convinced that the site was carved thousands of years ago when the landmass was above water.

According to Kimura the Yonaguni’s numerous right angles, strategically placed holes and aesthetic triangles are signs of human alteration. He also claims that carvings exist on the monuments, resembling Kaida script.

He believes that a pyramid, castles, roads, monuments and a stadium can be identified within the structure – which for him is evidence that the monument is what remains of the Lost Continent of Mu, the Japanese equivalent to Atlantis.

As with most theories of lost civilizations, Kimura has met with controversy about his beliefs. Robert Schoch, a professor at Boston University, has dived at the site and explains that the formation is “basic geology and classic stratigraphy for sandstones, which tend to break along planes and give you these very straight edges, particularly in an area with lots of faults and tectonic activity.”

Sandstone structures typically erode into rigid formations, and it is unlikely that the structure was entirely man-made, if man-made at all, because the visible structure is connected to a hidden rock mass.

Geology and strong currents may explain the peculiar shape of the rock, but they cannot account for the pottery, stone tools and fireplaces found there, possibly dating back to 2500 BCE.

However, the items merely show that the area was once inhabited and do not indicate that the monument is anything other than a natural geological formation.

Yonaguni is composed of sandstone and mudstone that dates back 20 million years. If the monument was carved by human hands, it was during the last ice age (about 10,000 years ago) when Yonaguni was part of a land bridge that connected the site to Taiwan.

Both the Japanese Government’s Agency for Cultural Affairs and the Government of Okinawa Prefecture deny Yonaguni as a historical-cultural site.