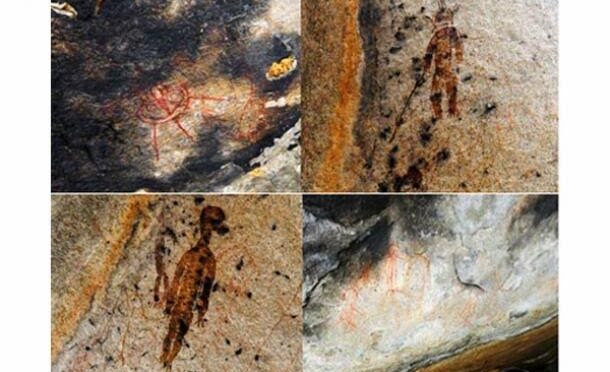 The State Department of Archaeology and Culture in Chhattisgarh, India, is seeking assistance from the Indian Space Research Organisation to research a set of ancient rock paintings found inside caves near the town of Charama in Kanker district, in the tribal Bastar region, according to a news report in the Times of India.

According to one archaeologist, the art reflects the belief among ancient humans that we are not alone in the universe.

The Indian state of Chhattisgarh has an abundance of ancient rock paintings, according to their website. Many sites have paintings of humans and animals in everyday scenes.

However, some researchers have referred to more unusual paintings, such as those depicting what appear to be kangaroos and giraffes, which are not native to the country, as well as human-fish hybrid creatures. Now, it is claimed that aliens and UFOs can be added to this collection.

“The paintings are done in natural colours that have hardly faded despite the years. The strangely carved figures are seen holding weapon-like objects and do not have clear features. Especially, the nose and mouth are missing. In a few pictures, they are even shown wearing space suits,” said archaeologist JR Bhagat.

Bhagat, who has studied rock art, claims that the newly-discovered depictions date back some 10,000 years, although the dating method has not been clarified.

Bhagat suggests that the images may depict extra-terrestrials and UFOs as the paintings include large, humanoid beings descending from the sky, some wearing what looks like a helmet or antennae, as well as a disc-shaped craft with three rays (or legs) coming from its base.

“The findings suggest that humans in prehistoric times may have seen or imagined beings from other planets which still creates curiosity among people and researchers.

“Extensive research is needed for further findings. Chhattisgarh presently doesn’t have any such expert who could give clarity on the subject,” Bhagat told the Times of India.

Bhagat explained that there are several beliefs among locals from the area.

While few worship the paintings, others narrate stories they have heard from ancestors about “rohela people”, which translates to “the small sized ones”.

According to legend, the rohela people used to land in the sky in a round-shaped flying object and take away one or two persons of the village who never returned.  However, Bhagat does concede,

“We can’t refute the possibility of imagination by prehistoric men.”

Bhagat has not made reference to the fact that the paintings in question depict what, in other contexts, archaeologists typically identify as shamanic images of humans, human-animal hybrids, and geometric forms. Images of figures with antlers, antennae, or spirit rays are familiar, and in fact quite common, in shamanic art.

The research on the rock paintings is ongoing, and Bhagat says more archaeologists will be consulted to help identify the mysterious creatures and objects in the ancient artwork.