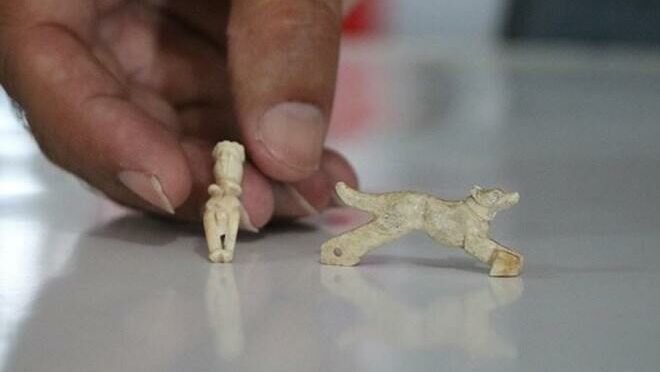 The 1600 years old bones-shaped, human and animal-shaped pendants have been unearthed by an archeological dig at Assos, one of the most important port cities of antiquity.

In an interview with the state-run Anadolu Agency, Nurettin Arslan, Professor in the Department of Archeology, and Head of Excavations, at Çanakkale Onsekiz Mart University, (ÇOMÜ) said that these were pendants dated from the 4th century B.C.

The ancient city is in Behramkale Village of Çanakkale Province’s Ayvacık District.

“There are two objects used as jewelry among those produced in the bone workshop to the west of the agora, one shaped like an animal and the other as a human. These must be part of jewelry which people used as necklaces in the ancient period,” Arslan said.

The professor also said that during the excavations, coins from the Byzantine Area to the Ottoman period were revealed.

“The largest group of coins uncovered in Assos are Byzantine (Eastern Roman) coins because the layers we are working on are mainly from the Byzantine period. These works show us that the Byzantine ruins in Assos archaeological site are a well-preserved center,” the professor said.

The findings show that there was an intense settlement in Assos between the fifth and seventh centuries. The settlement gradually decreased until the 12th century and eventually became a “small fortress” in the acropolis, Arslan said.

“Since there is no settlement, later on, we can say that the data related to urban planning, lifestyle functions of houses and daily life in the early Byzantine period are very valuable,” he said.

The professor underlined that one of the most archaic discoveries of the excavation works was stone axes made of granites.

“This stone axe was found on the surface in the necropolis area, but similar discoveries were made by Turkish archaeologists in the American excavations and during the 1990s,” he said.

“We have four axes dating back to the Chalcolithic period, to 5000 B.C. These axes are important such as they are traces showing that the settlement of Assos dates back to 5000 B.C.,” he added.

Founded on the summit and slopes of a volcanic hill at the southern end of the region, called “Troas” in ancient times, across the island of Lesbos in Greece, the city has been home to many societies for centuries.

One of its famous residents was Aristotle who together with the philosopher Xenocrates established a philosophical school at Assos.

The site, located 17 kilometers south of Ayvacık district, was accepted in the UNESCO Tentative List of World Heritage on April 15, 2017.

While 38 years of excavations have been carried out by Turkish scientists, new data for archaeology history have been revealed, and new scientists are also raised here.