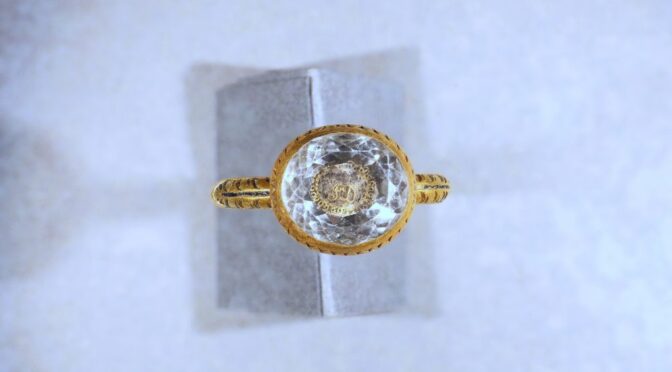 17th-Century Mourning Ring Unearthed on the Isle of Man

Manx Radio reports that a metal detectorist on the Isle of Man uncovered a piece of jewellery identified as a Stuart-period mourning ring made of crystal and gold inlaid with black enamel at the time of the English Civil Wars (1642–51) and will soon go on view at a local museum.

The accessory, which is inscribed with the initials “JD”—or possibly “ID”—is a mourning ring of the type given out at funerals during the Stuart period (1603–1714). Its sloping sides are adorned with engravings of leaves inlaid with black enamel.

“The ring is small and quite delicate in form, but of a high quality and intact,” says Allison Fox, an archaeologist at Manx National Heritage, in a statement. “The quality suggests that it was made for, or on behalf of, an individual of high status.”

Though Fox points out that researchers may never be able to definitively determine the ring’s origins, she says that it could have been connected with the Stanley family, which ruled as the Lords of Man for more than 300 years.

“The initials JD may refer to James Stanley, 7th Earl of Derby and Lord of Man, a supporter of the Royalist cause in the Civil War,” adds Fox in the statement. “Letters and documents from the time show that he signed his name as J Derby, so the initials JD would be appropriate for him.”

As the Isle of Man’s legislature, Tynwald, notes on its website, Henry IV granted the island to Sir John Stanley I in 1405.

In exchange for their continued possession of the island, the crown demanded that the Stanleys remain loyal and send two falcons to all future kings of England upon their coronations. John’s grandson Thomas—stepfather to Henry VII, the kingdom’s first Tudor monarch—received the title of Earl of Derby in 1485, and the family continued to rule under that title for centuries.

James Stanley, who was also known as Baron Strange for part of his life, became a Royalist commander in service of Charles I, and later Charles II, during the English Civil Wars, which pitted supporters of the monarchy against Oliver Cromwell’s Parliamentarian forces.

In 1651, Cromwell’s men captured and executed James. His eldest son, Charles, succeeded him. After James’ death, reports BBC News, his wife, Charlotte, worked to ensure that he was not forgotten.

Metal detectorist Lee Morgan discovered the ring while exploring the south side of the island, which is a British dependency located off the northwest coast of England, last December.

The exact location is being kept secret to protect the site. (That same month, noted BBC News in February, a retired police officer on the Isle of Man unearthed a cache of 1,000-year-old Viking jewellery.)

Morgan, for his part, has previously unearthed two other treasure troves: In 2013, he found a horde of silver coins from the 1300s, and in 2019, he discovered a silver ingot dated to between 950 and 1075, during the island’s Viking period.

The Isle of Man’s coroner of inquests, Jayne Hughes, has declared the Stuart ring treasure under the United Kingdom’s Treasure Act. (Current guidelines define treasure very narrowly, but as Caroline Davies wrote for the Guardian in December 2020, the U.K. government is working to expand these parameters to better protect the country’s national heritage items.)

Per the statement, authorities will display the jewellery at the Manx Museum before sending it to the Treasure Valuation Committee, which meets at the British Museum, for review.