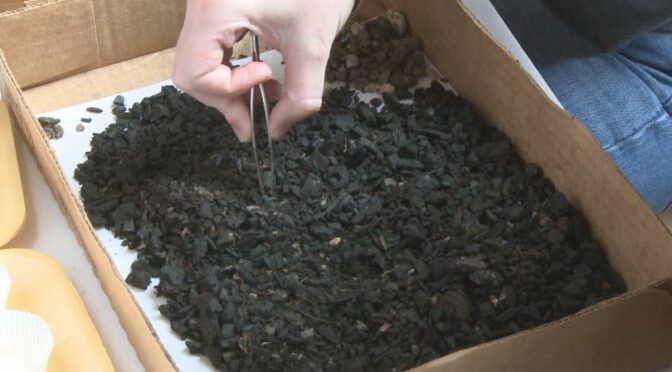 An 18th-century serpent sideplate was uncovered by archeologists from a British trade weapon at a historic fort in Mackinaw City.

The nearly 5 inches (12.7 centimeters) long piece was found last Tuesday in Fort Michilimackinac. It’s believed to date back to the 1770s.

Lynn Evans, the curator of archaeology at Mackinac State Historic Parks, said only four gun parts have been found in that particular location in 12 years.

“All of a sudden, here’s something we haven’t been finding,” Evans said.

Fort Michilimackinac is a reconstructed 18th-century for a trading village on the Straits of Mackinac. Over the centuries, the area was home to Native Americans, the French and the British.

The finding is part of a long-running archaeological program at the park.

Excavations take place seven days a week for 12 weeks in the summer, giving visitors a chance to watch archaeology in action and ask the archaeologists questions, too.

“It’s an unusual opportunity, and I think it’s great you can do it right here in Michigan,” Evans said.

The serpent sideplate will be taken to a lab to be washed, examined and labeled.

Over the coming winter, the sideplate and other items found during this summer’s dig will be cataloged and put into storage for future use by researchers or in exhibits, either at the fort or by loan to other institutions.

In addition to the serpent, 2019 discoveries have included a silver trade brooch, a door hinge and a large piece of feather creamware.

Evans said discoveries paint a richer picture of what life was like at the fort.

“We have a lot of documents about the fort, but we don’t have a lot of diaries,” Evans said. “What we find is not gonna change history, but it gives us such a better understanding of daily life here.”