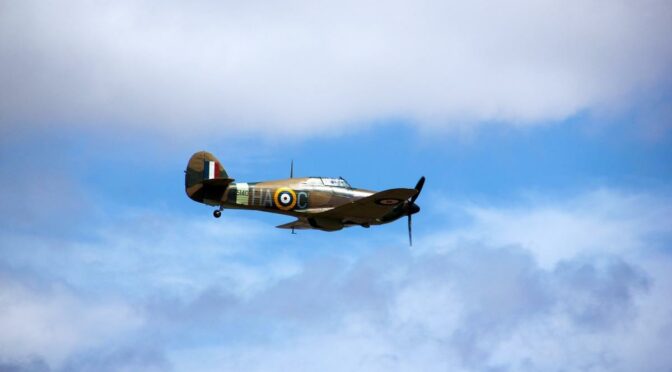 The single-seater crash site, which went down near Wickham in November 1940, was effectively excavated by Winchester University Students.

The undergraduate’s recovered wreckage left behind following the wartime RAF recovery including elements of the cockpit instrumentation, control column firing button (found ‘set to fire’), armored glass and crucially one of the aircraft’s identification plates that confirmed it as P/O Hugh Desmond Clark’s Hurricane N2608.

In addition, rather poignantly, the harness release, which would have been the last item handled by the pilot before he parachuted to safety, was recovered.

A geophysical survey was followed by three days’ excavation last Thursday through to Saturday at Frith Farm. The site has not been explored for nearly 80 years.

Dr. Marter said: “This project has provided a unique opportunity for students to explore the story of just one pilot and his aircraft that participated in the aerial combat taking place in the skies of Britain during late 1940.

We hope that their experience will help them to appreciate the value of this type of heritage and encourage them to play an active role in its future.

“We are extremely grateful to the landowners Mr. and Mrs. Arturi for allowing us to work on their land and making us feel so welcome.

We are also grateful to our project partner Gareth Jones and his team for their support and to the Joint Casualty and Compassionate Centre (JCCC) at Innsworth for their advice during the licensing process.”

The Hurricane was being flown by P/O Clark while intercepting enemy aircraft on November 1, 1940, the day after the Battle of Britain officially finished.

P/O Clark retired from the RAF as a Wing Commander in 1960 and, as part of their project, the students are researching his military career and hoping to trace any living relatives in the hope that they can tell his story and add this to their excavation report.

The students will continue the cleaning and cataloging of material from the site in the coming week.