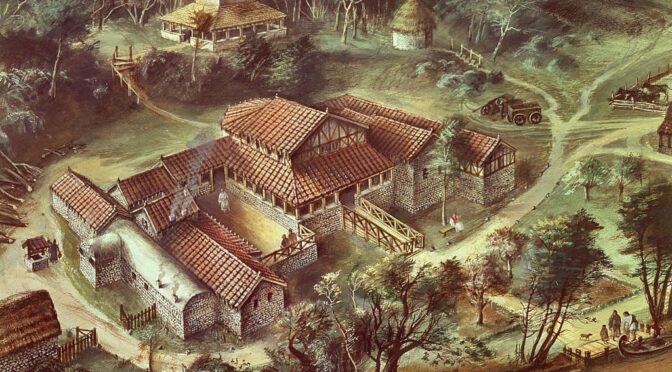 The remains of a 1,900-year-old Roman fort that once quartered 500 troops in what is today Germany were discovered by archeologists.

The fort was found in the town of Gernsheim, which sits along the Rhine River in the German state of Hesse.

Researchers knew the area was the site of a village during the first to third centuries, but otherwise, the region’s history during the Roman occupation is largely unknown, dig leader Thomas Maurer, an archaeologist at the University of Frankfurt said in a statement.

“It was assumed that this settlement had to have been based on a fort since it was customary for the families of the soldiers to live outside the fort in a village-like settlement,” Maurer said. Until now, however, no one had found that fort.

During an educational dig in the area, Maurer and his colleagues uncovered postholes that once held the foundations of a wooden tower, as well as two V-shaped ditches, which were a common feature of Roman forts of the era.

A unit of 500 soldiers, known as a “cohort,” was stationed at the fort between about A.D. 70 and A.D.120.Fortunately for modern-day archaeologists, the last Romans to leave the fort destroyed the place on the way out, filling in the ditches with rubbish.

This rubbish included “box after box” of ceramic shards, which can be dated to pinpoint the time of the abandonment of the fort, said Hans-Markus von Kaenel, a professor at the Goethe University Institute of Archaeology.”We really hit the jackpot with this excavation campaign,” von Kaenel said in the statement.

Researchers have been able to piece together a broad history of the Gernsheim region from a scattering of archaeological finds there.

The Romans built the newly discovered fort around A.D. 70 as a jumping-off point for control of areas east of the Rhine, according to von Kaenel and his colleagues.

The area was an important transportation hub, with roads branching off to access the borders of the Roman Empire. There may have also been a harbor on the Rhine at the time, though that has yet to be verified, Maurer said.

The modern expansion of the town paved over many suspected Roman sites, but Maurer, von Kaenel, and their colleagues managed to secure permission for a dig on a vacant double lot near where Roman-era finds were discovered in the 1970s and 1980s. This lot turned out to hold the remains of the long-lost fort.

A brick fragment found at the site identifies the troops quartered at the fort as members of the 22nd Legion, an elite unit from the late first century.

Researchers also found real treasures such as rare garment clasps, several pearls, parts of a board game (dice, playing pieces) and a hairpin made from bone and crowned with a female bust,” Maurer said in the press release