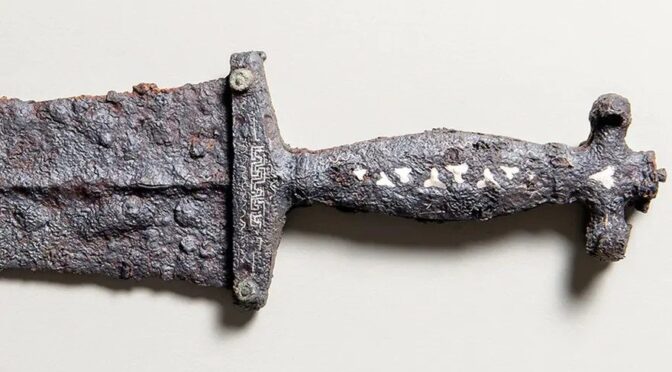 The finds – including a dagger, well-preserved slingshot stones, coins, nails and part of a shield – are assumed to have been left on the battlefield after a clash between Romans and a local tribe at around 15BC.

Lucas Schmid, who volunteers for the local archaeological association, uncovered the remains using a metal detector at a remote southeast corner of Switzerland, near the Crap-Ses gorge between the towns of Tiefencastel and Cunter.

Other artefacts had previously been unearthed at the location, but the site was considered to have been picked clean by previous sweeps.

Schmid proved this was not the case after discovering a 2,000-year-old Roman dagger.

This alerted an archaeology team from the University of Basel who has found several hundred other objects during an ongoing search of the 35,000 square metre site in September. These artefacts have now been made public.

How the battle unfolded

It is assumed that a battle took place between Roman forces and a local Raetian tribe near Cunter in what is now canton Graubünden.

“It looks like the locals were holed up and were shot at by the Romans with slingshot and catapults,” Peter Schwarz, professor of Provincial Roman Archaeology at the University of Basel, told Swiss public broadcaster, SRFExternal link.

Schwarz believes that as many as 1,500 soldiers took part in the battle, making it a fairly minor skirmish compared to other Roman battlegrounds in Europe.

The coins and type of shoe nails found offer firm evidence of the time period of the battle. But the team is hoping to narrow down the date even further and hypothesize that it could be linked to a known decree from Roman Emperor Augustus to bring the area under Roman control in 15BC.

“This is the first time that remnants from a Roman battle site have been found in Switzerland,” Schwarz told SWI swissinfo.ch. “It seems that the Romans attacked their enemy on one side of the valley and them drove them over a river to the other side, before attacking again.”

Dig to continue next year

Excavations will continue in the region next year, organised by the University of Basel along with the cantonal and federal authorities. So far no grave sites have been discovered and it is not known how many people died in the battle.

Raetian tribes occupied the eastern Alps at the time of the battle, including parts of modern-day Austria and Italy. The Romans conquered the region and named the area Raetia under Augustus.

Archaeological evidence of the Roman occupation of Switzerland is regularly unearthed. One of the most spectacular finds was a collection of mosaics in the western town of Orbe.