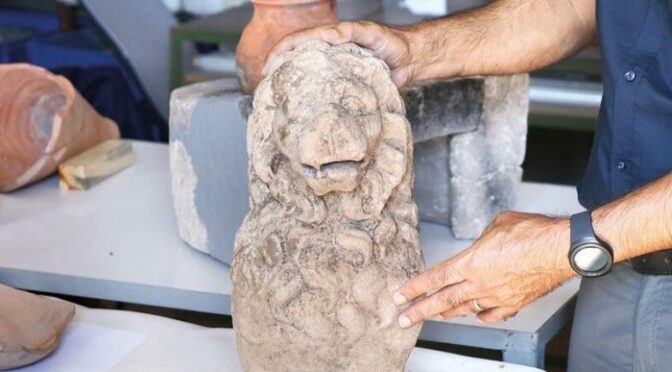 In Turkey during archaeological excavations in the ancient Greek town of Assos on the Anatolian shore, 2,200-year-old statue of a lion from the Hellenist Age and an Early Byzantine oven were found.

Assos, in the Ayvacik District, Canakkale Province, in Northwest Turkey, right across from the large Greek island of Lesbos, was a major Ancient Greek city-state, and a major Antiquity port.

It was also called “Apollonia”, after god Apollo, not unlike the predecessor of Bulgaria’s Black Sea town of Sozopol, the Ancient Greek colony of Apollonia Pontica.

The sculpture of the lion from the 2nd century BC was discovered in excavations of a complex in ancient Assos which used to be an inn during the Hellenistic period, says lead archaeologist Nurettin Arslan, reports Hurriyet Daily News citing Turkey’s state-run Anadolu news agency.

Excavations in Assos were also carried in agoras, or ancient city centers of Byzantine structures added Arslan, who is a professor heading the archeology department at Onsekiz Mart University in Canakkale.

Another intriguing discovery is a 1,500-year-old stone oven dating back to the early period of the Eastern Roman Empire (Byzantine Empire) also unearthed during the excavations in the area.

“One of the structures contained a find which was used at that time as a cooking stove with three pots,” Arslan reveals, adding that the well-preserved stove shines a light on the daily life of the Byzantine era.

The current excavations in the ancient city of Assos in Northwest Turkey began in July 2019, with a team of 25 people, and are set to be completed in October.

Turkish archeologists have been carrying out uninterrupted excavations in the Ancient Greek and medieval Byzantine city since 1981.

Assos was first studied after American researchers back in the 1800s.

Situated on a rocky hill overlooking the Aegean Sea, 17 kilometers south of Ayvacik, ancient Assos was accepted to the UNESCO Tentative List of World Heritage back in April 2017.