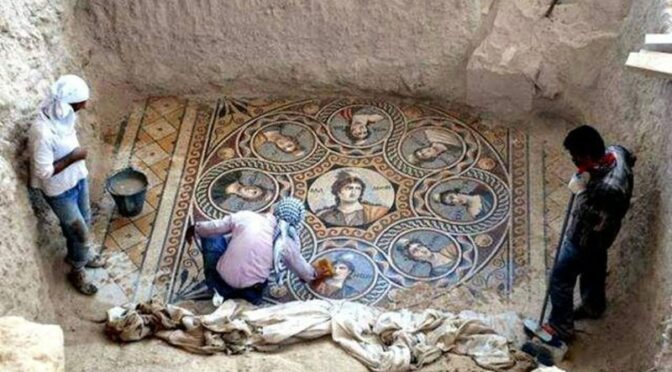 In the ancient Greek town of Zeugma, it actually located in Turkey, three new mosaics have been discovered.

The mosaics dating from the 2nd century BC are exceptionally well preserved, but they’re still as beautiful as the first day.

In addition, in Dacia (presumably today’s Romania) there are two ancient cities named Zeugma and one in modern Gaziantep province of Turkey.

However, to this day, Zeugma yields a trove of archaeological wonders with 2000-3000 houses in remarkably good condition. Excavations started in 2007 and have continued to this day.

The fact that the city was destroyed and then also hit by rubble created a sort of rubble barrier, which protected it from future treasure hunters or building material scavengers.

To make things even more interesting, Zeugma was completely underwater until recently, when a project to excavate the area received funding from a number of sources, and the past could finally be uncovered.

There are still many things left to be found in Zeugma, but for now, these mosaics look simply superb. Gaziantep Mayor Fatma Şahin and the head of the excavations, Professor Kutalmış Görkay uncovered them at a press conference.

“There are still unexcavated areas. There are rock-carved houses here. We have reached one of these houses and the house includes six spaces. We have also unearthed three new mosaics in this year’s excavations,” he said.

Görkay emphasizes that now, the project will reach its most important stage – conservation. Indeed, modern archaeology is not about finding things, it’s about preserving them for the future, and understanding the different aspects of ancient life.

“From now on, we will work on restoration and conservation. We plan to establish a temporary roof for long-term protection. We estimate that the ancient city has 2,000-3,000 houses. Twenty-five of them remain underwater.

However, while they are talking about preservation, the mayor and chief archaeologist don’t seem to really care about it that much.

They displayed extreme carelessness as mayor of Gaziantep and her staff amounted to 13 people who stepped on the 2,000-year-old mosaics that measure up to 10 square meters in size.

That’s right, while they are talking about the importance of preserving these finds, they are actually walking on 2,200-year-old mosaics.

“Cultural heritage is the most important and rich treasure there is; therefore, we are very rich. We are the grandchildren of a magnificent civilization of the past.”