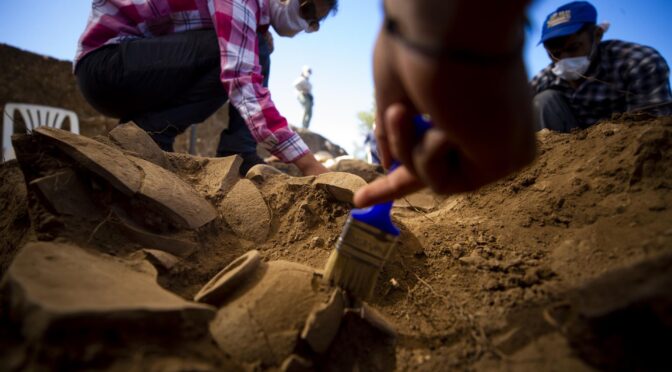 Hurriyet Daily News reports that a 2,400-year-old house, with a kitchen and a neighbouring room containing mirrors, ornaments, loom weights, and fragrance containers have been unearthed at the site of the ancient Lycian city of Patara.

The world of archaeology was delighted by the objects found during the excavations at Patara, the capital of the Lycian Union, where significant traces of human life were uncovered during the archaeological excavations.

Excavations take place in the area of Tepecik, where settlements of the city were established. The kitchen and the women’s room with mirrors, ornaments and fragrance containers have been found in this area.

Speaking to state-run Anadolu Agency, deputy head of Patara excavations, Associate Professor Erkan Dündar said that the Tepecik settlement in Patara is an area where the earliest finds and architectural structures of the ancient city were found.

Emphasizing that thanks to the excavations there, they reached information about the residential life during the Lycian Union period, Dündar said that besides residential buildings, there was a military garrison in Tepecik.

Stressing that Alexander the Great came to the Lycian region for a short time, Dündar said, “After he seized it, he set up a garrison as he did in many places.

The soldiers staying in the garrison brought their families here. It was a kind of military lodge. In addition to war tools such as stones, arrowheads and spears, we also found finds of residential life.”

What delighted them the most was the kitchen they found in an ancient house, Dündar said.

“We found the kitchen items in bulk. We found crush pots, storage pots, oil pots, casseroles and a hairpin.

The kitchen gave us important information about life in that period. We also found a women’s room during excavations. In a room called ‘women’s room,’ we found loom weights, small items belonging to women, mirrors, ornaments and fragrance pots. Women are women in every period. They always cared about their own beauty.”

Noting that the houses in the Tepecik region have stone foundations, Dündar said that the superstructures of the houses have flat roofs raised with mudbrick and that they resemble the highland houses in today’s Elmalı district.

Dündar said that the region does not attract much attention from visitors because it lacks aesthetics, but that academic and scientific data emerging from the region were very important for them.