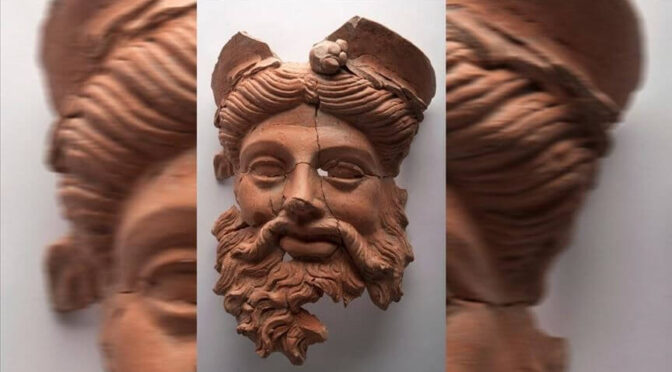 During excavations in the western part of Turkey, researchers unearthed a terracotta mask that dates back almost 2,400 years.

Archaeologist Kaan Iren who led the excavation team told Anadolu Agency that the mask depicts the ancient Greek god Dionysus and it is considered to be one of the most interesting discoveries of this year.

Dionysus was the ancient Greek god of wine, wine-making, grape cultivation, ritual madness, theatre, fertility, and religious ecstasy. He has also been referred to as the Greek god of carnivals and masquerades as well as a patron of the arts.

He was the son of Zeus and the mortal princess of Thebes named Semele. Dionysus was believed to have hidden his power as well as his identity.

Mycenean Greeks have been worshipping Dionysus perhaps as far back as 1500 to 11000 BCE. According to legend, if you wear a mask that honours him, you will be released of regret and secret desires.

As for where the mask was discovered, the ancient city of Daskyleion was situated on the shore of Lake Manyas in the Bandirma district of the Balikesir province at a time when Asia Minor had several Greek settlements.

The city received its name in the seventh century BC after a well-known Lydian King named Daskylos arrived there from Sardis because of a dispute within his dynasty.

Daskylos’ son Gyges was born in Daskyleion but was eventually called back to Lydia where he was crowned their king. After he became king, the city was renamed Daskyleion (the place of Daskylos) around the year 650 BC.

Getting back to the mask, Iren noted that it is “possibly a votive mask” meaning that it may have been used to express a vow or wish.

He went on to say, “More information will become available over time with more research.” It should be interesting to find out what more they can uncover. A picture of the mask and the excavation site can be seen here.

Additional searches are being conducted as Iren stated that earlier this year a cellar was discovered in the Lydian kitchen in Daskyleion’s acropolis, “Work continues to obtain seeds and other organic parts from the excavated soil in the Lydian kitchen and its surroundings through a flotation process.”

More research at the site will hopefully help the experts to have a better understanding of the ancient people’s food preferences and habits.