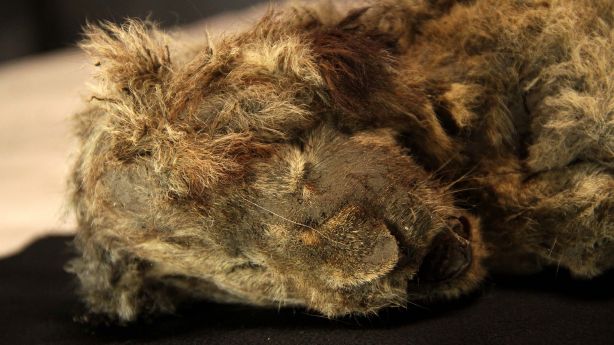 A nearly 28,000-year-old cave lion cub discovered frozen in the Siberian permafrost, is so well preserved, you can still make out each and every one of her whiskers.

Researchers in Sweden claim the cub, nicknamed Sparta, is probably the best-preserved Ice Age animal ever uncovered and describe Sparta in Quaternary. Her teeth, skin, and soft tissue have all been mummified by the ice. Even her organs remain intact.

To date, Sparta is the fourth cave lion cub (Panthera spelaea) found buried in the permafrost of Yakutia, which lies in the northeast corner of Russia. She was discovered in 2018 by local resident Boris Berezhnev who was looking for ancient mammoth tusks among the tundra.

As wildlife hunting and trade have become more restricted, ‘tusk hunters’ like Berezhnev have begun to search for ancient ivory in the icy north. With climate change weakening the permafrost and extending the tusk hunting season, we’re finding more ancient remains – and not just from woolly mammoths. In the past few years, residents in Siberia have pulled woolly rhinos, wolves, brown bears, horses, reindeer, and bison out of the permafrost, and some of these carcasses date as far back as 40,000 years.

Clearly, these icy steppes were once home to numerous large mammals. In fact, a year before finding Sparta near the Semyuelyakh River, Berezhnev found another cave lion carcass just 15 meters (49 feet) away. This one, named Boris, showed slightly more damage, possibly from its permafrost cave collapsing, but it was still remarkably intact.

Researchers in Sweden, who have since helped analyze the carcasses, claim both Boris and Sparta are about one to two months old. Yet despite their physical proximity and similar appearances, Boris is thought to be roughly 15,000 years older, give or take a few centuries.

Mummified bodies found in permafrost are some of the best evidence we have of their existence. Their frozen carcasses look remarkably similar to modern lions in many ways, just on a much larger scale and with a much warmer coat. But one of the most iconic features of African lions, their mane, seems to be missing on cave lions.

In fact, early human artwork from the time suggests cave lions rarely sported manes, or if they did, they were extremely discrete. Some Ice Age paintings, for instance, show dark patterns of colouring on the cave lion’s face, but it’s unclear what that represents.

Boris and Sparta are both juvenile cave lions, which means it’s hard to say how their coats would have developed as they aged. Apart from some dark colouring on the backs of their ears, researchers say they are mostly covered in yellowish-brown fur.

If the cubs had a chance to grow up, experts think their fur would probably have turned more of a light grey to help them camouflage in the cold Siberian Arctic.

The presence of a mane is important because it could tell us about the social structures of cave lions. For example, whether they live by themselves or in groups with clear hierarchies.

At the moment, scientists are still debating whether cave lions during the Ice Age roamed the steppes of Siberia on their own or in pride like modern African lions.

There’s one particular painting in France’s Chauvet cave from the Ice Age that depicts nearly a dozen cave lions, both male and female, in the act of hunting bison.

“Hunting in groups can be more effective than solitary hunting when the prey is large, and cave lions would have had many such prey species available in their ecosystem, for example, mammoths and rhinoceros, when there were no other options available to them,” the authors of the recent analysis write.

“In addition, large pride would have helped to protect their kill from the competition and also to protect the cubs and young from predators.”

For now, this is all just guesswork. Even though we have found some astonishingly intact cave lions in recent years, we still don’t have enough information about these extinct predators to reach any conclusions about their social structures.

Perhaps one day, that could change. Maybe we will unearth another cave lion with some hint about their long-lost lives. Or maybe one day, we will successfully bring cave lions back to life.

“There is a very realistic chance to recreate cave lions, and it would be a lot easier than to clone a woolly mammoth,” palaeontologist and one of the study’s authors Albert Protopopov told the Siberian Times.

Some scientists have suggested we do this with woolly mammoths as well, but cave lions are a much younger species. Protopopov suggests that we could supplement their clones with some of the genes from modern African lions, making the work a bit easier. That’s obviously a controversial idea, and the reality of it is probably still a ways off.

For now, the next step is to sequence the entire genome of both Sparta and Boris. Then, we can figure out what to do with the information we collect.