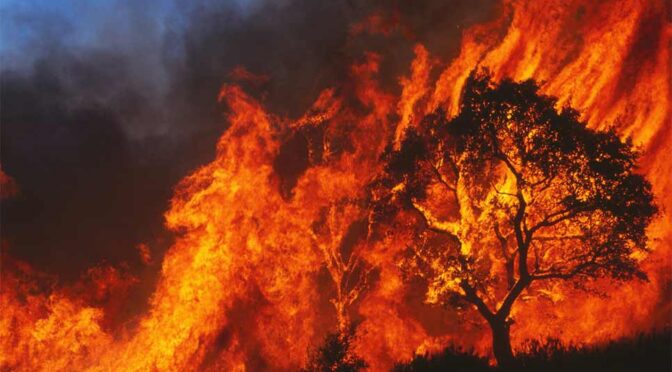 A 2,500-year-old ancient olive tree on the island of Evia was destroyed today in the ongoing wildfires consuming the region. The ancient tree was located in the olive grove of Rovia and was such an enduring symbol of the landscape that the ancient geographer and philosopher Strabo featured it in his writings.

The tree was large, with a trunk so wide ten people could fit along its diameter. The tree was fertile with olives all the way until it fell victim to the wildfire.

The tragic loss of the Evian tree was posted to Twitter by Apostolis Panagiotou, and the evocative image quickly gained over a thousand likes, with many Greeks leaving responses mourning the impact of the fires.

The destruction of the treasured tree is just one of many losses experienced by the Greek people in Evia during the course of the wildfires.

In a statement that showcases the desperation and pain of the people of northern Evia, Giannis Kontzias, the mayor of Istiaia – Aidipsos, said that what the people are seeing now is ”the completion of a holocaust.”

”Truth be told, we could have saved much more,” he says. ”I’ve been up on the mountain from Wednesday at 2:30 PM making dramatic calls for more aircraft in the front that we managed to keep back for 30 hours.”

Kontzias described the dramatic turn of events when the wind changed direction and brought the fire to the northwest of Evia.

”The wind turned the fire towards the Municipality of Istiaia Aidipsos, multiplying the fronts,” he explains.

”I’m making a dramatic appeal (to the Greek authorities) to bring aircraft.”

”Very few of them arrived yesterday, but they were inadequate. Today, only seven of them are operating particularly near Artemisio,” the devastated mayor explains.

”One after the other our villages fall. One municipal unit after the other is being destroyed completely. What’s saved has been saved by volunteers and the soul of the residents of this land,” Kontizas noted.

”They remained the last ones to save something from their homes, something from which we’ll be able to hold onto in order to stay and live in this land.”

“Our children will never see the environment and our land in the same way we saw it,” the mayor stated. The mayor of northern Evia made a grim prediction. He stated that in order for this area of Greece to return to its former status, it will take decades.

”We’ll be struggling for decades to bring northern Evia back to what it used to be,” he says, adding that they owe it to this land to do the best they can.

”The day after will have both financial and environmentally disastrous consequences,” Kontizas notes.

The mayor thanked everybody for their love and assistance and made a pledge for anyone who can assist in any way to do so.